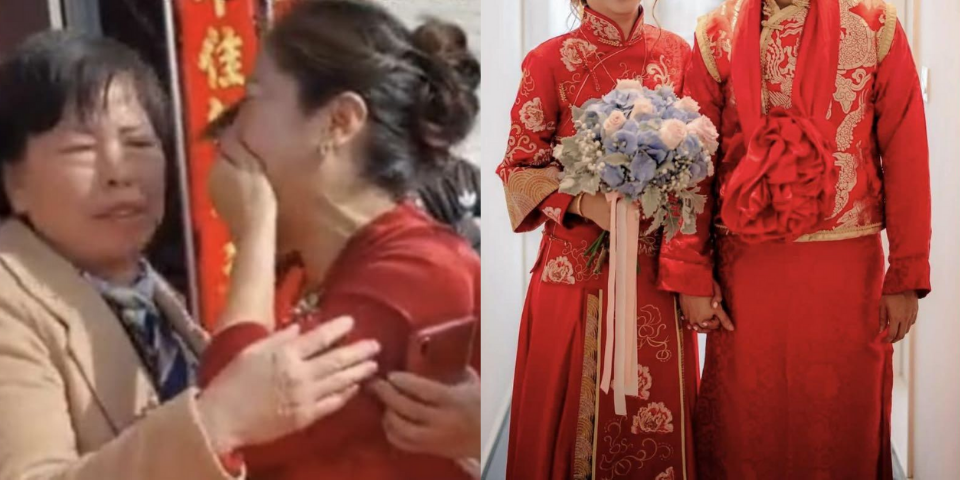 Truth is weirder than fiction in many ways. A mother arrives for her son’s wedding in Suzhou, Jiangsu Province, China, in March 2021. She had never met the bride in person and had only spoken with her on the phone. The bride, however, had a birthmark on her palm that matched the one on her small daughter’s hand before she went away years ago. The bride was the groom’s mother’s long-lost daughter, which was an extraordinary turn of events.

The groom’s mother approached the bride’s parents after noticing the birthmark on her daughter’s hand. She inquired as to whether or not they had adopted their daughter 20 years prior. The pair was taken aback by the question. Especially because the adoption was kept a secret from everyone, including their daughter. They did concede, though, that they had rescued her when she was a baby. They discovered the baby on the side of the road, abandoned. As a result, they adopted her and reared her as a member of their family. Following this, the bride’s mother examined the bride’s hand even more closely before determining that it was indeed her daughter.

When the bride heard this story, she burst into tears and hugged her biological mother. She later admitted that meeting her mother made her “happier than the wedding day itself.” However, the bride’s excitement was overshadowed by the fact that she was now related to her fiancé. She was stumped when it came to the wedding. Until the groom’s mother revealed that he, too, was adopted. She adopted a son after years of searching for her biological daughter. The bride and groom were not related biologically in any way.

As a result, the bride and groom were able to complete their wedding. The guests not only celebrated the couple’s marriage, but also the bride’s reunion with her mother.

This happy family reunion is one of many recent stories about relatives reuniting after many years apart. A Chinese child, aged one year and ten months, was stolen in late 1989 while playing outside her home in a village in Qian county, Shaanxi province, northwestern China. She grew up believing her biological parents had sold her because she had no memory of them.

Meanwhile, her parents reported her kidnapping, but due to a lack of eyewitnesses and technological limitations at the time, nothing came of it. They had given up hope of ever seeing their daughter again. Until around 30 years later, to be exact.

The parents met their long-lost daughter, as well as their younger sister and two brothers who had never met their elder sister, in their hometown. They all came together thanks to the efforts of the non-governmental All-China Women’s Federation’s local office. When the family’s search was discovered, a representative assisted them in contacting the county police. The officials then used a statistical database to locate a woman who appears to be the mother of their missing child. The rest was proven by a DNA test.

For the last 30 years, the woman had loathed her birth parents, believing they had sold her. The authorities then conducted a DNA test. That’s how she discovered her parents had been hunting for her all along.

In 2018, there was yet another incredible reunion. A Chinese couple has reunited with their stolen son 22 years later. When the four-year-old followed his father to work at a cement mill, a coworker abducted him. Even after two decades, the couple never gave up on finding their son. After soliciting the help of officials and volunteers all around China, they were able to find a DNA match. Finally, the family was reunited.