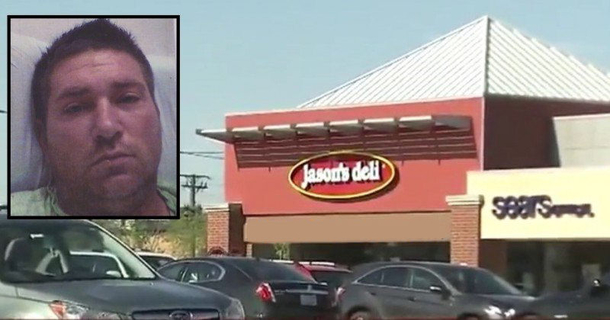 The mother and daughter couldn’t have known that their trip to the bathroom at Jason’s Deli would turn to terror, but that’s exactly what happened when 33-year-old man, Reese Hartstirn, walked in and targeted the girl.

Hartstirn walked over to the girl and began choking the child while trying to lock her in a stall. Her mother heard her startling screams and rushed over and began fighting with the man to get her daughter. Unfortunately, the deranged lunatic continued to choke the child until she passed.

Luckily, people in the deli heard the screams and ran to help. After seeing the girl’s unconscious body in the arms of the predator, they subdued him until police officers arrived. Hartstirn has been charged with aggravated kidnapping of a child, aggravated battery of a child, and battery causing bodily harm, as well as aggravated assault of a peace officer after he swung at an officer while being booked at the Central District station. He is being held without bond.

According to ABC7, Jason’s Deli released a statement Friday regarding the incident:
“We’re blessed to have a wonderful relationship with the Chicago Police Department. Many of them are our customers and because of their connection to our deli, this unfortunate situation was handled very quickly. We’re proud of how out team members responded and thankful that we have the kind of customers that are willing to lend a hand in a difficult situation. We continue to work hard every day to make every customer happy.”

Although her current condition is not known, the unnamed victim was taken to Comer Children’s Hospital. As one can imagine, customers of Jason’s Deli were troubled to learn of the events that took place there.

“This is at a restaurant,” said Crystal Anderson. “You want your kid to be able to go to a bathroom in a restaurant and feel safe and not be scared… and not worry about someone trying to abduct your kid.” She added, “You want to have the best world you can for your children, and with people out here like that, you got to wonder what you can do to make it better.”