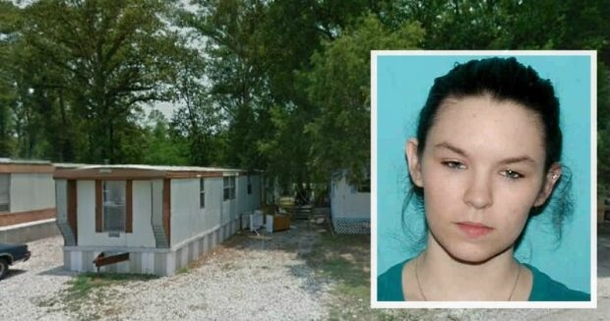 A Louisiana mom noticed an unusual new behavior from her toddler daughter that she’d never done before. It began after she left the child for a period of time, but when she couldn’t get her child to stop, she turned for help. Now, someone’s going to jail after authorities realized where she got it.

The Prairieville mother-of-two, Tyler Dauzat, had just arrived to a motel on Sunday, when shortly after she walked in, she noticed what her 2-year-old daughter was doing. Passing the actions off as the girl just being a crazy kid, the 21-year-old was forced to get help for the girl when it became worse, and she was concerned about what her daughter might have just been a part of.

Tyler brought her youngest down to the doctor, who could only be described in the moment as being extremely “erratic,” but her mom said that she had no clue as to why. After some tests of the toddler and further questioning of her 21-year-old mom, it was Tyler’s behavior that became of growing concern.

According to The New Orleans Advocate, the 2-year-old was showing signs of being high on meth and acting aggressive. Blood tests proved their suspicions, but the mother’s admission made it worse. Uncooperative with physicians and Child Welfare authorities about why her daughter had a significant amount of meth in her system, Tyler kept denying any part in it. After further questioning, she finally fessed up to the fact that she had left the 2 and 4-year-olds in the motel room with her purse, which held a massive mount of the drug.

In the mother’s absence, the curious 2-year-old had gotten inside the handbag and helped herself to some of Tyler’s crystal meth that was in powder form. The degenerate parent was immediately taken into custody on two counts of negligent injuring and cruelty to juveniles, illegal use of a controlled dangerous substance in the presence of a juvenile, and improper supervision of a minor.

Her drugged up daughter is miraculously expected to make a full recovery, at least for now, and will be placed into protective custody with her older sibling, upon release from the hospital.

As this drug addict sits in jail awaiting her fate, hopefully she sobers up to the reality that she is responsible for almost killing her child, because of her poor life choices. It’s only by the grace of God that either of her two kids are still alive, but if given a second chance with this person, they might not be so fortunate the next time.

Chances are, since this woman hasn’t amassed a long rap sheet and is just now on Child Protective Service’s radar, they will give her several more undeserved chances to parent. She’ll likely fail each time, and nothing will happen until something even more drastic than her daughter eating a fistful of meth comes up. It takes a child practically dying a few times before anything can be done to protect them.