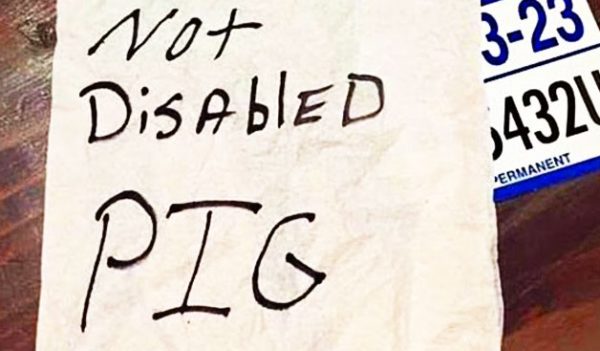 Stacy Barlow, a 43 year old mother of seven from Levittown, Pennsylvania, was diagnosed with Parkinson’s Disease at a relatively young age. She did her best to stay strong and as healthy as possible for her family, but some days were a struggle. Just recently she had to call her fiancé, Jeff, and have him pick her up at the store because her legs had cramped up while walking around.

Most people know Parkinson’s Disease by the outward symptoms such it causes, such as shaking and trembling, slow movements, and difficulty with balance and walking. It affects the part of the brain that controls how your body moves and while it’s more common in older people past the age of 60, it can appear at any age. While there is no cure, the symptoms can be mitigated and managed with proper medical care. Even though Stacy didn’t always have the telltale tremors, her symptoms would often suddenly appear out of nowhere.

On this particular day Stacy had gone out to Walmart where she ended up parking in a handicapped spot with her hang tag clearly displayed on the rear view mirror. At the time, she had already undergone one brain surgery operation and had another one scheduled less than a month away.

After she had parked, Stacy headed right inside to Walmart where she planned on picking up some goods that she needed and doing a little grocery shopping for her family. She had brought her seven year old daughter along with her and neither of them noticed anything out of place when they arrived.

After checking out and leaving the store the pair walked back outside to the car. That’s when they noticed a white napkin stuck in the windshield under a wiper. Stacy grabbed it and saw that it was a note. When she read it, she was shocked and surprised to see that it said, “You are not disabled PIG.” As if that wasn’t bad enough, her car had also been keyed with deep scratches down the side.

Stacy couldn’t help but wonder why anyone would do such a thing. Just because her disability wasn’t blatantly obvious and she didn’t use a wheelchair or have a cane, it didn’t mean she was any less deserving to park in the spot. To leave such a nasty note and ruin her car was beyond rude and mean, it was just evil.

Later on she showed the note to Jeff and after snapping a picture he posted it online to Facebook. When Stacy read the comments, she noticed how mean some of them were, but then the positive ones started to come in and they soon drowned out the bad. People were offering their support and she felt better to see that there was a lot of understanding and compassion out there.

Fortunately, Walmart security cameras did manage to capture the person who was responsible for damaging her car and leaving the nasty note. However, the police are still trying to identify them. Hopefully they saw the news and learned that they targeted a person who was wholly undeserving of their uncalled for actions. Just because a person does not look outwardly handicapped doesn’t mean that they are not going through some tough health issues.