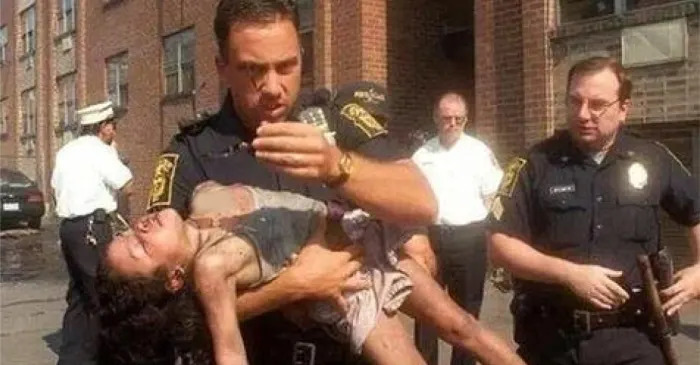 A young woman was reunited with the police officer who saved her life in an apartment fire in 1998.

Josibelk Aponte tracked down retired police Detective Peter Getz, the man who resuscitated her after she was rescued from a burning apartment in Hartford, Connecticut in 1998. The two have become close friends, and Getz attended Aponte’s graduation from Eastern Connecticut State University.

“There are only a few moments that are so important in life,” Aponte told the Hartford Courant. “I wanted to share my graduation with everyone who’s important to me, who has been there for me, and who has helped me through tough times.”

Aponte was 5 years old when a fire broke out in her apartment on June 25, 1998. The girl, who had been home with her uncle, Jofrey Aponte, at the time while her mother worked, said that all she could remember was the room being filled with thick smoke as she tried in vain to wake her uncle up.

Getz was called to the scene of the fire. After a firefighter pulled Aponte out of the apartment and handed her over to Getz, the police officer performed CPR on the girl in the back of his cruiser while his partner drove to the hospital. Aponte was reportedly unconscious and in cardiac arrest.

By the time the officers passed her over to emergency staff, she was breathing on her own again. She woke up in the hospital a few hours later, surrounded by her family and the rescue workers who had saved her.

Jofrey died of his injuries days after the fire.

Getz and his colleagues in the police department continued to help Aponte’s family after her rescue, getting a local furniture store to donate items to the family and raising money for Jofrey’s remains to be taken to his native Venezuela for burial.

“It’s one of those things that touches your heart and stays with you,” Getz said, according to the Daily Mail. “It’s a situation that we could control, that we could foresee the outcome of. The firemen did their job, I did my job, the hospital staff did their job. As a result, we still have a beautiful young woman still on the face of the Earth.”

A photograph published in the Hartford Courant in 1998 shows Getz walking away from the burning apartment with the young girl in his arms. The retired officer, who is now an investigator for the Aetna insurance company, keeps the photo on his desk at work.

Although he has kept tabs on Aponte after her family moved to Vernon, Connecticut, he wasn’t sure if the young woman would want him to contact her.

“To see the outcome, to see how successful she’s been, makes my heart beat faster,” Getz told the Hartford Courant.

“Not many people can or are willing to put themselves in danger to save others,” Aponte said. “It’s because of people like Peter and all of our police officers and firefighters that I’m alive.”