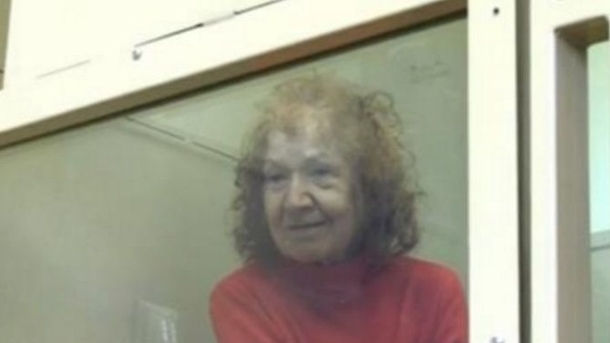 The Russian serial killer dubbed “Granny Ripper,” who admitted to a string of murders which occurred over two decades, may have also eaten parts of her victims bodies, Russian police say.

The 68-year-old grandmother, Tamara Samsonova, confessed to 11 murders following the discovery of her dead friend whose body was found headless in St. Petersburg last week, according to Daily Mail.

The woman admitted to the murder of her 79-year-old friend, Valentina Ulanova, whom she said she’d become tired of, Komsomolskaya Pravda. Samsonova is suspected to have given her final victim an overdose of sleeping pills prior to mutilating her body with a hacksaw while she was still alive.

She was caught by police after CCTV video footage captured her removing Ulanova’s body from her home in a plastic bog.
Samsonova reportedly logged gruesome details of her crimes over the years in a personal diary written in Russian, English and German. Following the discovery of her brutal murder of Ulanova, investigators discovered accounts of a dozen murders since the late 1990s in Samsonova’s diary.

Detectives refuse to release further details of the diary until the murder investigation is completed. Russian police have now said it is possible that the woman was a cannibal, and ate parts of the bodies of those she killed. Samsonova is said to have regularly dismembered her victims, chopping off their heads, arms and legs. According to sources in Russia’s Investigative Committee, internal organs were removed from the victim’s bodies as well, Daily Mail reported. Investigators indicate that lungs, in particular, were usually removed.

Samsonova is also believed to have killed her husband, whom she reported missing in 2005.
Investigators have not been able to determine a motive behind the series of murders, and Samsonova will be subjected to a psychiatric examination prior to trial, according to RT.com.

After her arrest, Samsonova was reportedly most concerned about her neighbors and the city learning of her crimes.
“It’s such a disgrace for me,” she told journalists while in custody.

Samsonova told the judge that she had been preparing for her arrest for “dozens of years.”
“It was all done deliberately,” she said. “There is no way to live. With this last murder I closed the chapter.”
When the judge announced Samsonova would remain in custody, the woman smiled and clapped her hands, according to Daily Mail.