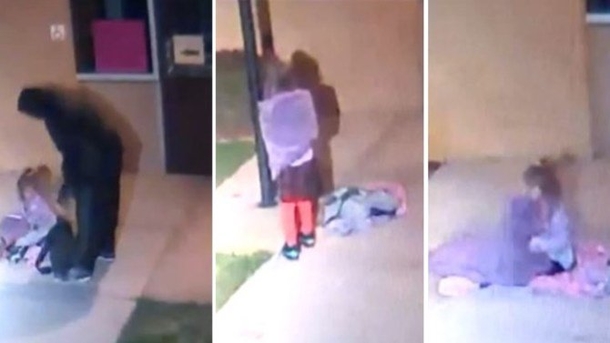 Authorities are investigating an Ogden, Utah, father after he left his daughter alone before dawn on a college campus.

The father, who was identified as Adrian Sanchez by the girl’s mother and Ogden police, took his 5-year-old daughter to the Ogden-Weber Applied Technology College and left her in front of a doorway near a closed daycare center in 39-degree weather around 5 a.m., according to security footage obtained by KTVX.

“It broke my heart,” the girl’s mother Gena Weaver said of watching her daughter in the surveillance video. “No 5-year old deserves having to fend for themselves or wonder if someone is going to find them. I’m still in shock.”

“She said she got scared,” Weaver told KSTU. “She was yelling, ‘Daddy!’ but no one was there.”

The girl’s father left her with only a blanket.

“She said she just kind of had her blanket and waited until daylight,” Weaver said.

According to Weaver, the father told the girl to remain in one place.

“[He] told her to shut up, and lay down and go to sleep,” Weaver said.

The surveillance video does not capture audio, but it shows Sanchez speaking to his daughter before leaving her alone in the cold.

“It shows her freezing and … she said, ‘mom I hid under the blanket until daylight,'” Weaver said, according to KTVX.

At around 7:30 a.m., the girl ran toward a security guard for help, KSTU reports. She tripped and fell, scraping her knee and hand.

“It was heartbreaking for him,” college security manager Fred Frazier said of the guard who found the girl. “To see a little girl running alone by herself. That’s when he got very concerned, and she was shivering and cold.”

It is unknown why the father left her at the college.

“We don’t know really what purpose he’d take the child, if there was a drug-induced psychosis” Lt. Tim Scott with the Ogden Police Department said. “Right now, we’re waiting to interview the father.”

The Department of Child and Family Services is involved in the investigation.

The father may face charges of felony child abandonment or abuse.

According to her mother, the girl was traumatized by the experience.

“She is hanging in there, she’s strong,” Weaver told KTVX. “Just like in the video she’s very, very strong.”