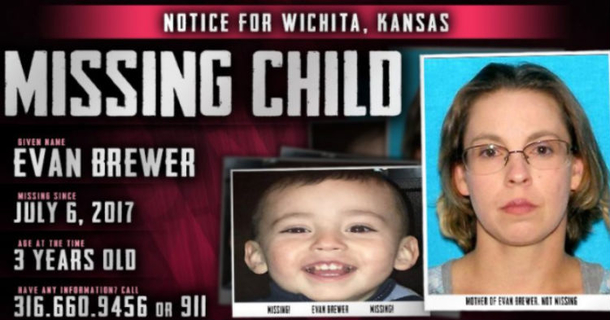 A child going missing is never a story anyone wants to hear. Children are innocent and for someone to kidnap them and put them in harm’s way is such a sickening thing that anyone can do.

During the search for this missing child, cops arrested the child’s mother along with her boyfriend. Unfortunately, the boy’s body was found in concrete not too long after the arrest. May this young boy rest in peace.

Police have aggressively searched to find Evan Brewer, of Wichita, Kansas, after he was reported missing. When he suddenly disappeared he was living with his mother Miranda Miller and her boyfriend Stephen Bodine at the time.

Although Miller and Bodine were both arrested, it was for separate child custody cases. Now that Brewer’s tiny body was found encased in concrete at his mother’s home, more charges will likely be coming.

Although police have yet to formerly identify the remains found in the concrete, they are confident that the lab results will say it is 3-year-old Evan Brewer’s body.

As police broke the missing child’s case, Miller and Bodine were already in Sedgwick County Jail facing other charges.

While they were in jail, the police conducted a search of their home and found the remains hidden in the concrete. Although the missing child’s remains have not been formerly announced, they believe it is from the 3-year-old.

And if the remains are formerly identified as belonging to Evan Brewer, the police will need to draft up charges to add to the boy’s mother and her boyfriend’s criminal record.

Although police are not making an announcement, the boy’s father, Carlo Brewer, hired an attorney who told KWCH: “We have known this child has been missing for months at that location (residence on South Vine) and it was a 3-year-old’s body that was found.”

The attorney also said that Miller had a DNA swab done so the police investigators can check the dental record.

Back in July, the boy’s father had gone to court to file for an order to protect his son from Bodine, whom the dad thought was a threat. And now that the boy seems to have turned up, his father was right all along.

According to the Wichita Eagle, the landlord was busy cleaning at Miller’s home. Then he noticed the new concrete structure and could smell a sickly odor coming from it.
And when the police removed the structure and opened it up, they found remains inside.
Police think it is a child but they are still conducting their investigation and find it to be extremely suspicious, Officer Charley Davidson said.

“We have a tentative identification on the child, but confirmation of the child’s identity is being coordinated through the Sedgwick County Medical Examiner,” Davidson said in a prepared statement. “Our thoughts and prayers go out to the family of the child and others impacted by this tragic case.”

The story has stirred up a lot of anger among readers online. Here were some comments shared on Mail Online:
“There should be an instant death penalty for these types of murders.”
“There is a special place somewhere for this pair.”

“Boyfriend will be charged with manslaughter, girl will cut a deal to testify against him because people don’t believe she could be the main culprit. Her lawyer will claim abuse, out in less than a year and pregnant again, the end.”

What do you think about this criminal activity?

Please SHARE YOUR REACTION in the comments below today!