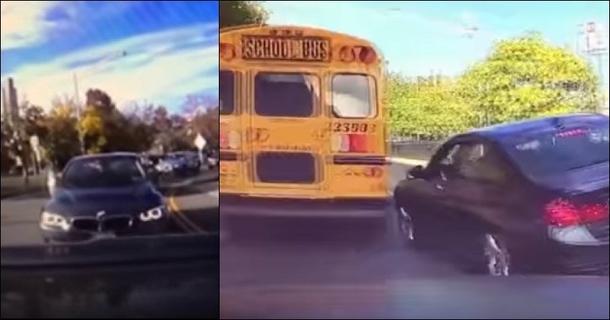 There are all kinds of idiots out there on the road, but those with road rage pose the biggest threat to everyone’s safety, including their own. Proving just that was a driver of a BMW who apparently thought he owned the road but learned otherwise when he tried to pass a bus – and that’s when karma gave him a swift kick in the backside.

The incident took place in Albany, New York, where a driver who was minding his own business happened to have his dash camera up and running. Knowing that he wasn’t going to get anywhere fast, considering the long line of traffic ahead, he decided to let a school bus merge even though it didn’t have the right away.

Unfortunately, it seems not everyone was in such a patient mood as a driver in a BMW, just behind the man, began to lay on his horn. Clearly not happy that his fellow motorist was allowing others in front of him, he wanted to make his sentiments known.

Things soon turned to chaos as the driver of the BMW saw that a lane had opened up –or so he thought. Taking advantage of the extra room, the road raging driver sped off and passed the vehicle with the dash camera before trying to overtake the school bus that had been allowed in front of him.

It was at about that moment that the driver realized he had made a tremendous mistake as the “lane” that opened up was no such thing. In fact, karma came around to smack him big time as his extra room came to an abrupt halt. 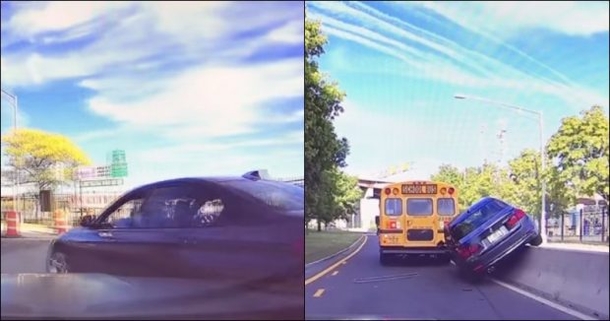 As seen in the clip, the BMW driver was actually driving in an intersection that ended with a few pylons on the sidewalk. Making matters worse, to avoid those, the idiot had to swerve, which resulted in him slamming into the bus he was trying to pass – but things were far from over.

In fact, viewers have been left utterly satisfied to see this moron get exactly what he deserves as his car then rides up onto a concrete barrier that was on the side of the road. In the end, he came off looking like the jack*ss that he really was.

Fortunately, no one was hurt in this situation, but things could have ended much differently with such a reckless driver. Just remember to be patient out there. Nothing is worth your life – especially those few seconds you would have saved by speeding up a bit.