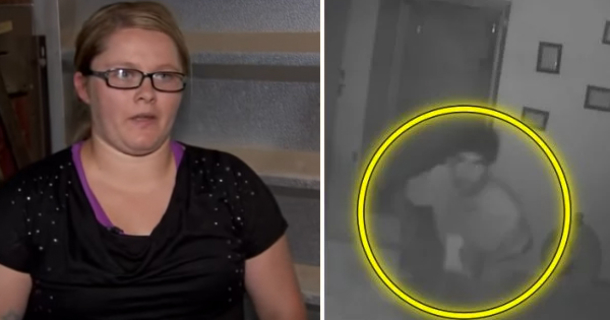 When this 25-year-old criminal broke into a home in Taft, California, the only people in the house was this loving mom and her four children.

The intruder probably thought this would be an easy invasion with them being easy targets. He never thoughts in a million years that this angry “mama bear” would be equipped with a firearm and ready to defend her kids at all costs — even if if it meant firing a fatal shot.

Inside Edition reports that a mom from California is now being labeled a hero after she thwarted a home invasion and robbery inside of her home. She ended up detaining the suspect by gunpoint until cops arrived. Chilling surveillance footage recorded every second leading up to the mommy hero Brittany Morse pointed the weapon at the intruder while she calls 911 for help. “If you move, I will shoot you,” Morse told the man.

It all began when Morse’s daughter Aubrey opened the door leading to the family’s garage and saw the strange man. Aubrey immediately slammed the door shut and ran to her mother.

“She opened the door, she sees him there, and slams it shut, screaming, running back to me,” Morse told the local media. “When my daughter told me there was someone in our house that was not allowed to be here, I am looking at all of my kids and I’m telling them to go down the hallway … ‘Go, go.’”

What unfolded next is a testament to the mother’s bravery and grace under pressure in what one can only imagine was the scariest experience of her life. A fearless Brittany Morse first ushered her children to safety in a bedroom down the hall in their home. Then, she grabbed her gun and removed the lock on it as quickly as she possibly could with adrenaline pulsing through her veins.

Morse then confronted the man in her garage, keeping her weapon trained on him while she waited for police to arrive. When she heard sirens, she yelled for her son to let the cops in. They arrived just two minutes after her 911 call was placed and Morse immediately instructed her children to run outside the home to safety as the intruder was taken into custody.

Moments later, 25-year-old Aoreliorho Velasco was arrested and charged with first-degree burglary. He has pleaded not guilty, although that is going to be very difficult to prove, seeing as there is surveillance footage which captured his every move inside of the Morse home.
“It’s a little overwhelming at times, but I did the right thing,” Morse said in retrospect. “I protected my children.”

Of course, you will not see this very important story reported by the mainstream media, as it flies in the face of their favorite gun control narrative; namely, that all firearms are unsafe and should not even be owned by law-abiding citizens like Brittany Morse. But, as we have seen in the case of the Morse family, that is simply not true.

If Morse had not been prepared with a firearm the day her daughter spied an intruder in their home, this story could have ended much differently. After all, “a good guy with a gun” is often the only way to neutralize a threat. Moreover, Morse is the perfect example of a gun owner who puts safety first. As the video above shows, she keeps her firearm locked and unloaded unless there is an emergency.

The Morse children are very fortunate to have a mother who puts their safety first and who will defend them by any means necessary in the face danger. They can sleep easy at night knowing that “Mama Bear” will take care of them. Please share this story if you support the inalienable right of law-abiding citizens to bear arms!