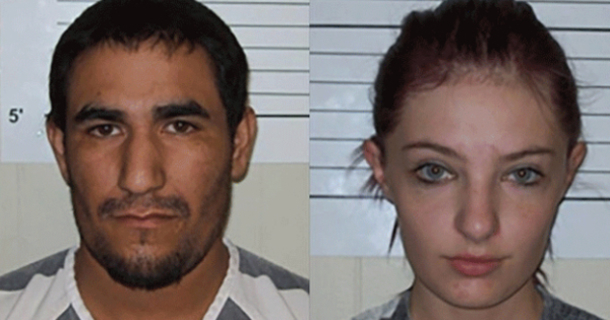 A couple is facing serious charges after tragically, their son of 4 months passed away, at the time of his death he only weighed 7 pounds.

Sadly, this story only gets sadder and worse as cops start to investigate and make a second horrific discovery about the 4 month old that will leave your gut twisted in knots.

Cheyanne Harris and Zachary Koehn gave birth to their baby boy in May. Sadly, this couple is now going to prison after being charged for the child’s passing after he was found dead inside of his baby swing.

An even sadder part of this story is that the boy weighed less then 7 pounds during the time of his death. It was also discovered that he wasn’t taken being taken care of for over a week prior to his death. However, no matter how terrible this abuse already seemed for the helpless infant, things only got worse when police began to investigate and made the second horrifying discovery about the boy’s body.

An ambulance was called to the couple’s apartment after Koehn explained to authorities that his 4-month-old baby, named Sterling Koehn, had died. When police arrived, they discovered the baby “in a motorized swing seat in a different bedroom from where the couple and their other child slept,” according to KTLA.

Unfortunately, as the investigation continued, things only got worse. In fact, an autopsy by the state medical examiner’s office found that the infant measured well below the fifth percentile in size and weight for the child’s age.

However, the second horrifying discovery they made was absolutely gut churning – there were maggots in various stages in development found on the child’s skin and clothing.

It was determined that the child “had not had a diaper change, bath, or been removed from the seat in over a week.” He was not cared for and was outright abused through neglect from his parents. His death has been classified as a homicide with the cause of death ruled as a failure to provide critical care.

His parents, Harris and Koehn, are facing charges of first-degree murder and child endangerment resulting in death. They are being held in the Chickasaw County Jail and are scheduled to be arraigned on November 2, 2017.

Amanda Reynolds, who has known Koehn for nearly 10 years, “knew they killed him.” According to Heavy, she stated that “Zach was a very nice, mellow human being. He came from a good family.” However, he recently became addicted to methamphetamine and became a different person.

“It hurt because I can see all their Facebook activity, and they wanted sympathy from everyone. It’s heartbreaking…I have two kids and I can’t imagine doing this to them. Had I known, I would have taken Sterling in a heartbeat,” Amanda Reynolds said.

I don’t know what kind of person you have to be to leave a baby in a swing, uncared for, for an entire week. It’s a shame that this young boy was treated this way. Children are a blessing from God and deserve to be loved and nurtured by their parents. Unfortunately, this little guy wasn’t given any of that. Instead, his life has been cut short too soon.