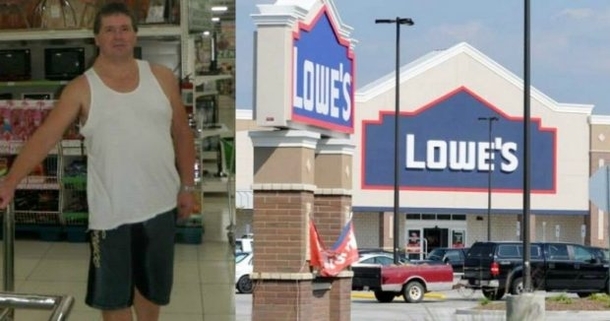 A confused-looking man wandered into his local Lowe’s store and began talking to a sales clerk. When a manager overheard what he was saying, he made a quick evaluation of this strange guy and noticed something amiss about him, then acted fast when his eye caught what was on the ground near him.

After suffering an accident that left Lima with a brain injury, the grown man has had an impossible time trying to get a job. Refusing to give up and live off of government assistance alone, he has stayed the course despite constantly being told “no,” since evidently nobody wants to hire a guy that’s slightly slow and also relies on a service dog.

Lima went in for an interview at the Lowe’s home improvement store and brought Blue into the interview with him. He was nervous that, like every other interviewer so far, he and Blue would be turned down. But the pair got a pleasant surprise.

According to CBS News, manager Paul Gallo heard about Lima’s struggle but saw something else — a hard worker who doesn’t give up. Gallo immediately offered the man a job but placed a single condition on his new position as a customer service associate/greeter. The caring employer insisted that if he was going to bring Blue to work every day that the dog gets a uniform also to wear on the job. 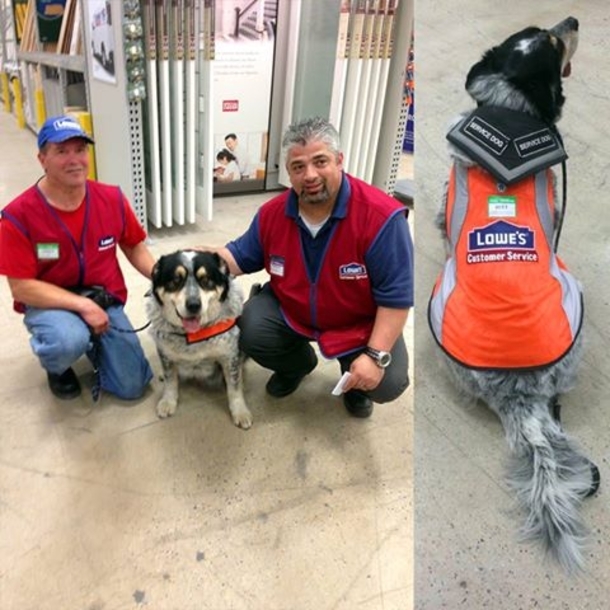 “It’s so hard to find a job where people can accept me for the way I am and the fact that I have a service dog with me,” Lima told CBS News, through tears.

The store’s manager, Paul Gallo, told Lima upon hiring him, “We don’t care about your past, what you are — we care about what you can do.”
Gallo found the perfect job for Lima and Blue at the home improvement store. Lima will be a customer service associate, and he and Blue will spend their time on the job greeting customers and managing carts near the entrance of the store.

Lima and Blue’s story was posted, along with a photo of Blue in his work vest, on the Lowe’s Facebook page. The story quickly went viral, being shared more than 11,000 times in under 48 hours, according to CBS News.

“We’re overwhelmed,” Gallo said. “We never intended for this to happen. We listened to an individual and we took him on board like we would anyone else.”

Viewers shared their thoughts on the touching story on the Lowe’s Facebook page.

“Way to go Lowes!” one user commented. “Thank you for hiring these two new employees! I know others who are physically limited who want to work but no one would give them a chance.”

“Awesome!” Another viewer commented. “The Lowe’s Manger is what this country needs more of! Congrats on the new job Mr. Lima and Blue!”