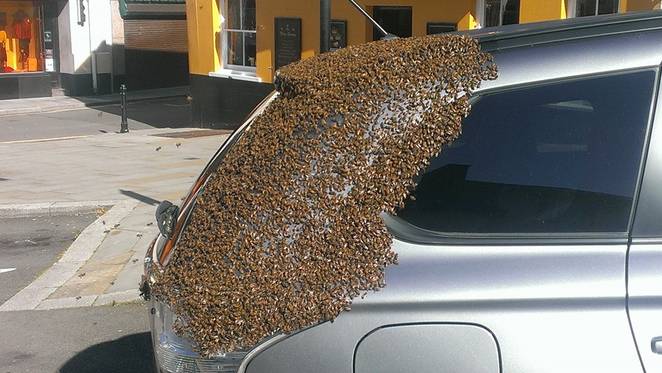 When Carol Hayworth parked her Mitsubishi car in the town of Everfordwest, Wales, to go shopping, she had no idea that total chaos was about to occur.

While she was busy making her arrangements, a swarm of 20,000 bees was drawn to her car.

A local resident, Tom Moses, saw the buzzing swarm, and for fear of harming the bees called a group of beekeepers.

“It was amazing. I was driving my car when I suddenly noticed a huge brown lump”, he said. “A lot of people were amazed by the thing, cars slowed down, and people started taking pictures”.

“I was a little worried, because it was in the middle of town outside the pub, so someone could do something stupid to hurt the bees”, Tom said.

By the time Hayworth got back to her car, the beekeepers had already dealt with the bizarre situation.

The swarm of bees kept an eye on Hayworth’s car, and managed to find it again.

“The next day I realized that some of the bees were following me home”, she said. So she called again to the beekeepers who came to her aid.

“We think the queen bee was attracted to something in the car, maybe something sweet, and managed to get caught in the wipers or another part of the car”, said Roger Barnes, a local beekeeper. “The swarm of about 20,000 bees followed her and just stuck to where she was”.

Eventually, the adventurous queen and her bees were reunited again.

Barnes said it was the strangest thing he had seen in all his years as a beekeeper. “It’s natural for them to follow their queen but it’s a strange thing to see and very surprising that they followed the car for two days. It was quite entertaining”.