Mariah Welling-Tessmer, 16, and her friend Chris Pogozelski, 17, were walking through a grassy field about 200 yards behind the shopping center where the Toys “R” Us store is located when they found the remains, Cleveland.com reported.

The teens said they discovered what appeared to be bones and a skull near two mattresses. They also found piles of clothing near the mattresses.

“We saw the bones and I was like, ‘That’s a femur!’ and then walking forward more, we saw the skull,” Chris told Cleveland.com.

“We saw this mattress and a whole bunch of teddy bears,” Mariah added.
The pair initially thought the bones were fake, and picked them up and took Snapchat photos of them, according to ABC 5. When they realized that the skeletal remains were indeed real, they called police. 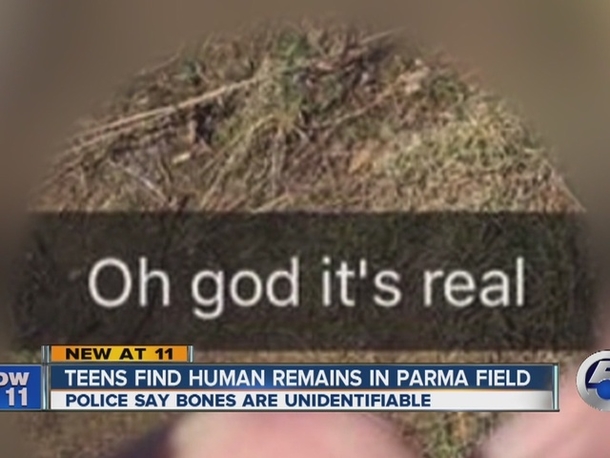 Lt. Kevin Riley of the Parma Police Department said in a press conference that dispatchers received the teens’ call around 4:15 p.m. April 5, according to Cleveland.com.

Investigators are currently working with the Cuyahoga County Medical Examiner’s office to determine the race, gender, and age of the person that the bones belonged to.

They plan to look into local missing persons cases to help identify the remains, and will broaden the search if necessary.
The teens, who reportedly walk through the field regularly to look for cardinals, said the mattresses were not there the last time they visited.