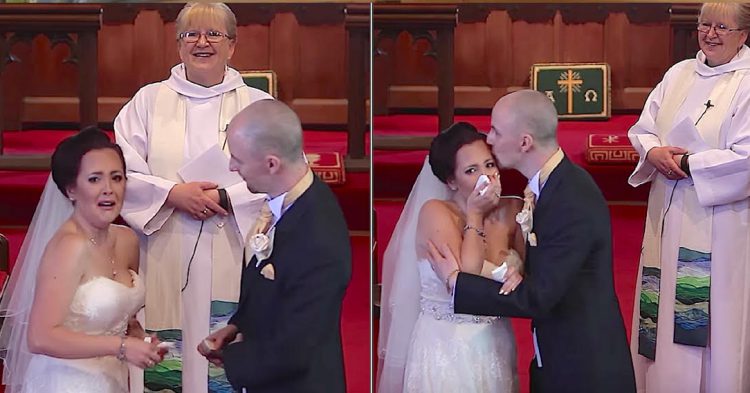 A wedding ceremony is the happiest day in the life of any couple. The opportunity to stand in front of their loved ones and make a lifelong commitment is truly a beautiful thing for so many people. And it takes untold effort for a bride to plan the wedding ceremony of her dreams.

The stress of the big day can cause many brides to fall apart, so it is reasonable to think that every bride wants their day to go as planned. So when Liz Ravelhall from Warwickshire, England realized that her fiance, Ollie Ravelhall was trying to delay their ceremony, she became very upset.

Liz had everything planned for her wedding. She got the perfect dress, the perfect venue, and rings, invited her guests, and hired a videographer.

She had no idea that she would receive the surprise of her life on her special day after all that planning.

Little did she know that her husband had something planned up his sleeve. Something that would make her know just how loved and appreciated she was as a music and dance teacher at Jaykays Dance Company in Warwickshire, England.

The ceremony began just the way it was planned. She walked down the aisle in her gown, met her husband, and was ready to exchange her wedding vows.

Her husband, Ollie, pulled a box out of his pocket. She suddenly heard a sound coming from the back of the church in the galley of St. Lawrence Church in Meriden. Her husband motioned for her to turn around. 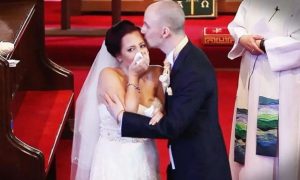 Her hand immediately flew to cover her mouth when she did. That’s when the angelic sound of her pupils singing Christina Perry’s beautiful love song “A Thousand Years” began.

Liz was overcome with emotion and began to cry happy tears. Her husband kissed her forehead and put his arm around her as his wife wiped away her tears with a napkin. She began to happily sing along with them. The students then waved to their beloved teacher during the sweet ceremony.

The beautiful surprise was put together by Ollie and Liz’s boss, Jeren Hogben, the owner of Jaykay’s Dance Company.

The surprise was captured by Van Rensburg Wedding Film.

“The children were amazing at keeping the surprise secret,” Van Rensburg Wedding Film wrote in their YouTube caption of the video.

See for yourself, and keep the tissues close.