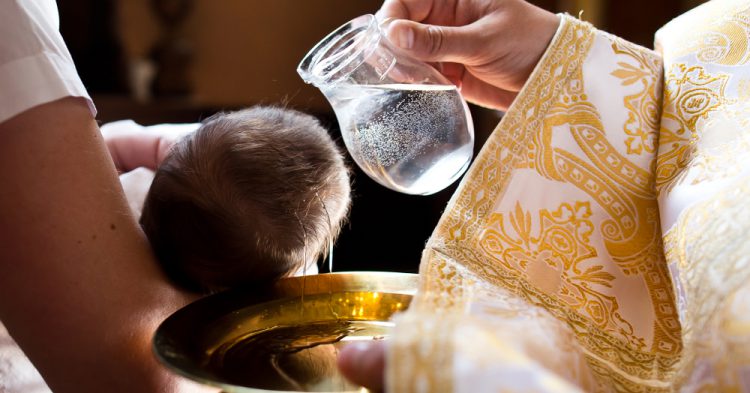 A young Mississippi couple wanted their new baby baptized at their church, but said the pastor had sent them a letter refusing to perform the sacred ceremony because they were not married and were “living in sin.”

Kamri Mclendon, 18, lives with her boyfriend of two years, Tristan McPhail, in Sumrall, Mississippi. They welcomed their baby girl, Presleigh, in May. Having grown up in the church, Mclendon said she wanted to have an infant baptism performed at Hickory Grove United Methodist Church. 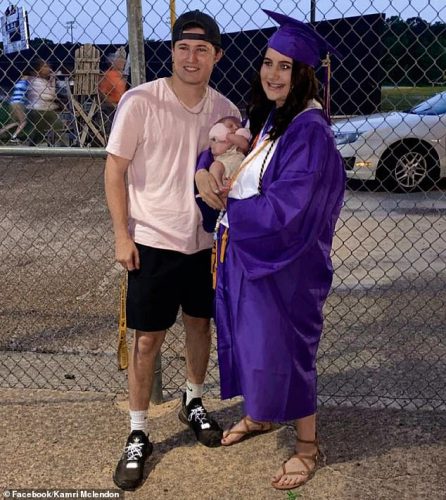 The couple said that the Rev. Dewayne Warren had agreed to perform the baptism, knowing that they were unmarried and had been attending church sporadically since the birth of their daughter.

After agreeing to perform the baptism, Kamri received a letter on September 15 from the church pastor, Rev. Dewayne Warren, stating that he could not proceed because he had learned that she and her partner were “living in sin.”

In the letter, which Kamri shared on Facebook, Warren wrote that her grandmother was also “living in sin” with a man and that the couple had not “frequently attended faithfully” at church. 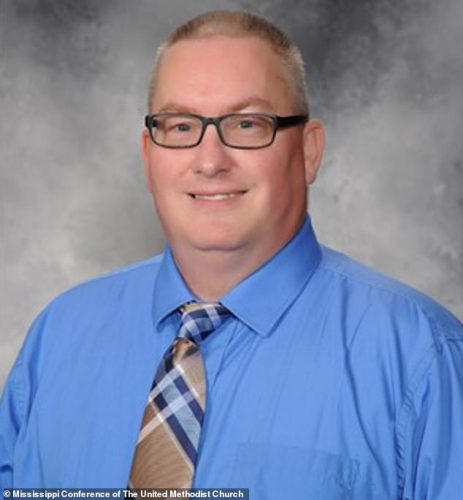 Warren said it would set a bad example for other young churchgoers for him to perform the blessing.

“I say all this in Christian love. I know it’s hard, but it’s the truth. I tried to wait for the Holy Spirit of God to convince you of this, but we were running out of time,” wrote Warren.

Kamri said both she and her boyfriend were mostly shocked.

“We are aware we sinned, but us repenting for that is between us and the Lord. Not to be shamed by a church,” she wrote on Facebook. “When people ask why there are no young people in these churches this is why. My heart is breaking.”

“I am writing to inform you that we will not be able to do the ‘baby dedication’ on Sunday, September 25, 2022. The following reasons are why I have made this decision. I am informed that you and the baby’s father are living together in sin; the baby was conceived before the parents were married. The grandmother is living with a man in sin. You and the father have not been in regular, faithful attendance at our church.”

“The ceremony that you want performed is a Christian ceremony. It is a covenant between the parents and God. You promise to raise your child in the Christian faith with all that entails. That means that you attend church on a regular basis with your child. It means that your life shows that you are living the Christian faith. I do not see that in your life at this time. In this ceremony, the church pledges that they will help raise your child in the Christian faith. In the ceremony, the parents and grandparents, if present, have to say that they have repented of their sins. I don’t believe you, as the parents or your mother, can honestly say that if you are living with someone outside of marriage.” 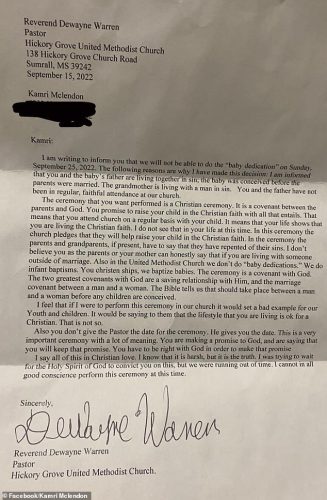 “Also, in the United Methodist Church, we don’t do ‘baby dedications.’ We do infant baptisms. You christen ships. We baptize babies,” the reverend added sarcastically.

She later updated her post to say that the “district superintendent for the Methodist Church met with [Warren] and rectified the situation.”