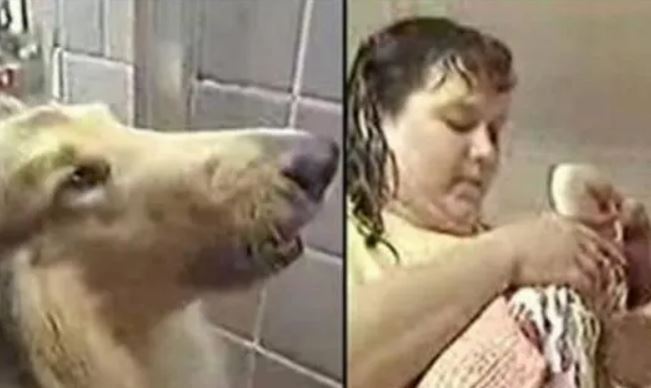 Dogs have been so relevant in people’s lives ever since the world began. Indeed, dogs are man’s best friend. They are one of the nicest and smartest creatures in the kingdom Animalia. They’re dependable and amusing but can sometimes become annoying and irritating.

Mindi Wynne fell in love with a collie at the pet store in the Trotwood, Ohio, mall where she worked. So her husband Ron Wynne bought it for her.

She named the beautiful long-haired collie Papillon, after the breed in the cage next to him at the pet store and looked forward to many happy years with this new family member.

But two years later, the Wynnes feared that they couldn’t keep Papillon much longer. Although he got along well with their 9-year-old daughter, Amanda, and 7-year-old son, Matthew, they were worried about how he was behaving around their newborn daughter, Rachel.

“He acted what we thought was very, very jealous when Rachel was born,” said Ron. “He was always right there, right where the baby was.” He and Mindi were concerned for Rachel. “We thought all the attention Papillon was giving the baby was jealousy,” he said. “We thought maybe we ought to get rid of him.”

All that changed on June 19, 1993. Mindi was taking a shower, she was alone in the house with her baby and Papillon. She had just tucked her five-week-old daughter to sleep and then opted to take a shower.

While having her time, she suddenly heard the dog barking frantically in the other room. She ignored it at first and got on with her bath. Papillon continued barking and it irritated her. She didn’t want the dog’s bark to wake her baby up. Papillon came barging in the bathroom door and peeked in the shower curtain.

This time, Mindi sensed trouble and so she decided to follow him.

“He ran around, barking, knocking doors open, and finally burst into the baby’s room,” she said. “He jumped up and put his front paws on the crib. When I looked at the baby, she was blue.” Rachel had stopped breathing.

Mindi screamed for Amanda and then immediately started doing CPR to revive Rachel. Amanda, who had been playing in the yard when she heard her scream, ran in to see what was happening. When she saw her performing CPR, she called 911. An ambulance arrived minutes later and rushed Rachel to the hospital.

Rachel, who is fine thanks to Papillon, had suffered from something called reflux. While she was sleeping, she spat up some of her food and it went back down the wrong way. Instead of going down her esophagus, it went down her windpipe, stopping her breathing.

If Papillon hadn’t been so insistent in alerting Mindi to her condition, she would have choked to death within minutes. “We’re just real pleased and real proud,” said Ron. “We’re just tickled pink with Papillon. And what of the talk about giving him away? I don’t see that as a possibility anymore. He’s staying right there.”

Papillon had become a local and national hero. He was grand marshal of a parade in Trotwood and was named first runner-up in Ken-L Ration’s 1993 Dog Hero of the Year contest.