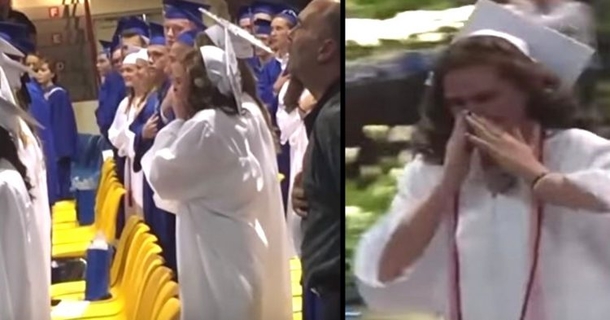 At one high school graduation, A student was brought to tears. Dressed in her cap and gown, she finally did it. She had graduated from high school and was ready to move onto the next stage in her life. But while everyone else around her was smiling and sharing the joyful experience, she felt exhilarated but also sad. And as the Pledge of Allegiance began, she could no longer hold back the tears.

They burst from her eyes and streamed down her cheeks. She was crying in front of her entire class. Miranda, the student, never thought she’d react this way during her graduation.
Until the moment Miranda started crying, the graduation of the Florida high school seniors had gone off without a hitch. They were facing the stage when the guest speaker rose to address them and inspire them as they moved into the future.

Before the speaker even got to the content of the speech, he said, “Good evening everybody. Would you please join me in the Pledge of Allegiance?”

As soon as Miranda heard that, she started to cry. With her classmates reciting the Pledge around her, they noticed her tears and her sobs and tried to console her.

When it was time to take their seats, Miranda did the opposite. She raced for the stage toward the guest speaker. Not many people knew, but the man dressed in uniform who led the Pledge was Miranda’s brother Derek. He was an Airman who made it home in time for his sister’s graduation. And that meant the world to her.

Miranda thought Derek was still overseas serving the country. But when he was granted leave, he decided to make his homecoming a surprise. And the way he did it proved to be a day that she would never forget. In the video below, you’ll see how Miranda reacts when she notices that the man in uniform leading the Pledge is none other than her beloved brother.

Her reaction was filmed and shared with USA Today. The video included below was viewed more than half a million times. The following were some reactions from viewers like you:
“No way she was going to be seated. Nope!”

“Don’t you love the fact that everyone in the video was applauding, EXCEPT the PO’d Principal at the podium who just stood there like a statue, Wanker.”

“I just can’t imagine what it must be like for a family that has a loved one serving in a combat unit. Knowing their loved one is in harm’s way every day. My heartfelt thanks to the service members & their families that protect us every day.”

“I don’t usually cry. I’ve watched thousands of these videos literally and have never once shed a tear. I’m balling like a baby right now. (I don’t know) if it’s because I’m sleep deprived or what, but this video got to me.”

What do you think about Miranda’s reaction to her brother’s surprise homecoming?