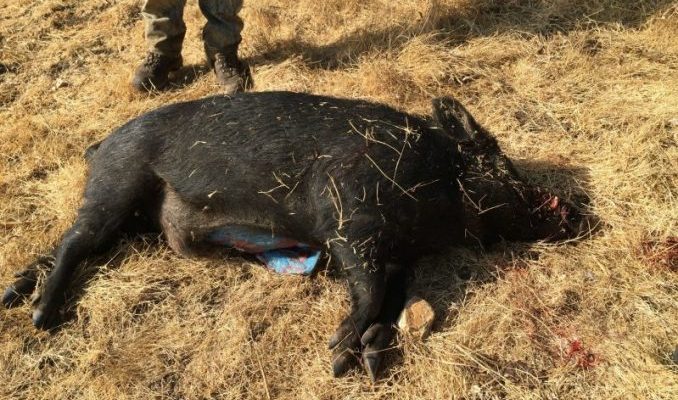 GlendilTEK, a Reddit user, posted an image gallery titled “The Weird Pig” on September 9, 2015, accompanied by a thread in the subreddit r/whatisthisthing titled “My in-laws shot a wild pig on their ranch in Morgan Hill, California, the pig has fluorescent blue fat, which is unusual. Is there any explanation for why the fat is this color?” 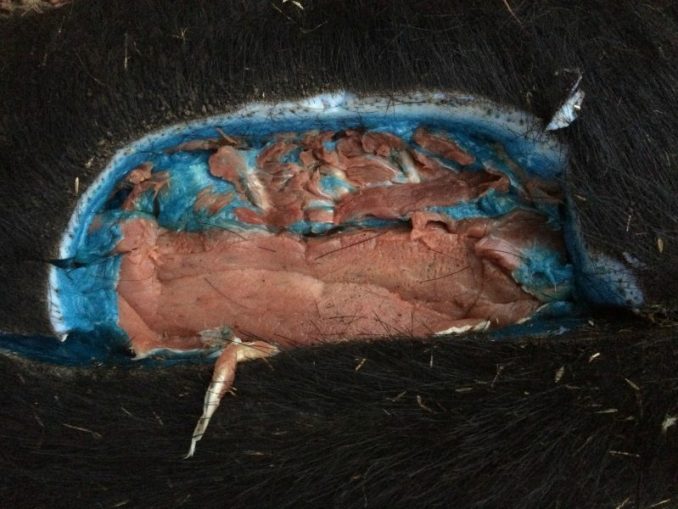 Five images of the particular alleged carcass were included in the gallery and its related thread:

“So, my in-laws live on a ranch in Morgan Hill, CA and they shot a wild pig on it. They thought it a normal pig until they cut it open. (Just to clarify since there has been questions they did not start cutting open the pig until they had strapped it to the ATV and driven back home so most of the blood has left the pigs body at this point.

When they cut into the pig they found that the fat on the pig was a fluorescent blue. (I know blue pigmentation is often caused from copper poisoning but all that they have are some old mercury mine shafts that they have filled in. They have also shot wild pigs on the ranch before and none of them have been blue.)

Everything else about the pig was normal, the meat, blood, etc. The only weird part was the blue fat throughout the body.

We have no clue why the fat is this color but it is all over the pig no matter the section.

They are sending in a sample to UC Davis to see the cause of this, but if anyone knows please feel free to explain because we are at a loss.” 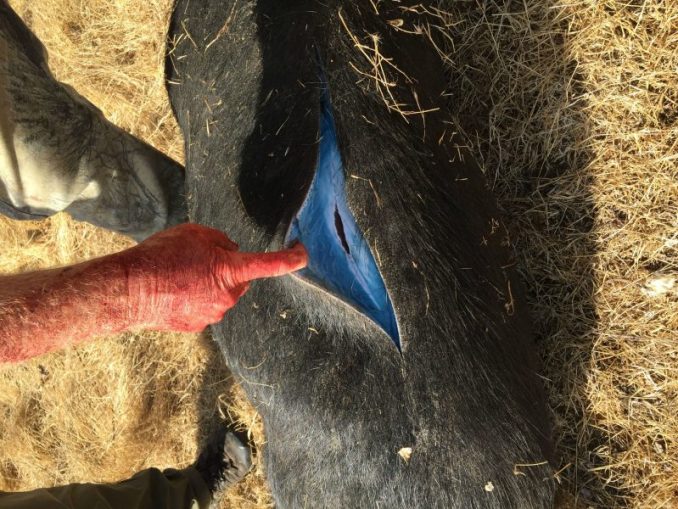 None of the images appeared to have been previously published online with a different attribution, and every instance of their online presence followed the Reddit thread. Therefore, it was unlikely that the poster made up a clever backstory for intriguing pictures he had found elsewhere online. Although it took some time to determine whether the images were real, other Reddit users claimed to have seen the phenomenon before in the same area.

As Reddit user sheep_wrangler replied, “Yep! Hunted pigs in Morgan Hill, CA where this was shot. We used to poison the ground squirrels with anticoagulant rodenticide which was dyed blue. I guess they are teaching this in hunters safety according to another CA hunter. “If the meat is blue, it is not for you!” But Ive shot a few pigs that had that color but not even as close to that vibrant of a blue. But yea its because of a poison we used on ground squirrels!” 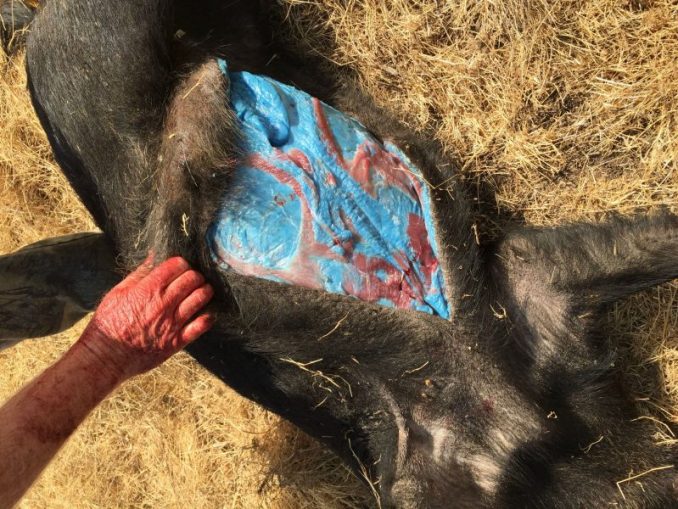 The couple has already sent samples of the blue fat to researchers at the University of California, Davis to find out its cause. Although they are still awaiting the results of the investigation, many believe that the hog had been consuming something with rat poison.

In squirrels, the aforementioned anticoagulant appears to produce a similar “blue fat” effect. The majority of commenters seemed to agree that the pig’s color was caused by something he ate.

“A user who self-identified as an ecologist surmised that the pig consumed something that was fat soluble. Some folks are suggesting the pig drank from a Port a John, but given the side effects, I am not sure it would have really done this … Someone mentioned Anticoagulants put down to kill ground squirrels which are pests in California. I think this is the most likely culprit,” One user said, who identified himself as an ecologist suggesting that the pig ate something that was fat soluble. 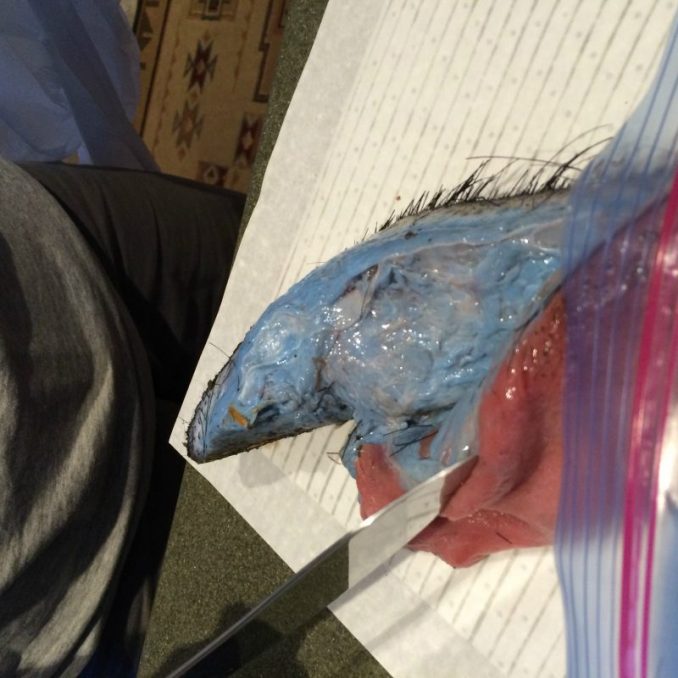 According to the user who submitted the photos, testing on the pig’s remains was not yet complete:

“Just a quick pseudo update. They have not heard back on the results, but have let the carcass sit for about a day, no animals seem to touch it or try to eat it which was interesting. Also, they reached out to there neighbors and no one mentioned any dying of food, but I will ask them if they will ask specifically about it. Lastly, they do have some old mercury mine shafts on the ranch, but those are filled in. They have also shot wild pigs before on their property and they have not been blue. I hope this extra info helps and thank you for all the theories and help! Edit: sorry if this isn’t the proper way to update a post I’m a tad new to posting to reddit and don’t yet know how to do things.”