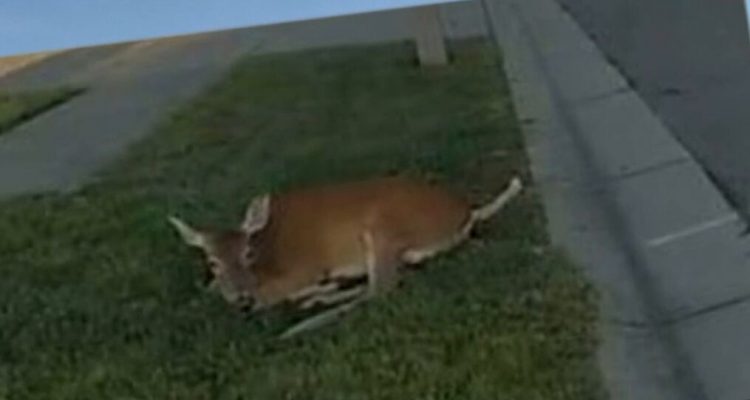 The deer population has been displaying some really creepy behavior that reminds people from Ohio and other parts of the Midwest where this has been happening, of zombies!

As it turns out, this is because of a disease some of the animals are infected with. Earlier this week, police from southern Ohio were called to check out a strange sighting.

Public information officer from Ohio’s Colerain Township Police Department, James Love, reports that “This deer was standing there and was unresponsive to us, just like… like it wasn’t afraid.”

EHD, sometimes referred to as “zombie deer,” is a viral infection deer get from biting midges. The infected deer can lose their fear of humans and have other neurological signs like circling, weakness, and not eating. Deer that die from EHD often have a swollen tongue, eyelids, neck, or head. While it’s usually fatal, some deer survive and develop immunity.

“Once infected, deer show symptoms within five to 10 days, and many deer die within 36 hours of the onset of symptoms,” the ODNR reported.

Thankfully, the disease is not contagious to humans or pets and is not spread among animals.

Love goes on to share that as soon as the police approached the animal, they noticed some discolorations on its coat. Furthermore, even though they were really close to the deer at that point, it still did not move.

“It was a complete surprise to all of us. We have never seen anything like that,” he added.

More details of this bizarre disease among the deer population, Western Journal reported:

Authorities said the virus deteriorates in less than 24 hours after death and can’t be spread from deer carcasses, according to the report by WKRC-TV.

While the disease is usually fatal, the ODNR said some deer survive the virus and develop immunity, WJW reported.

It’s a frightening sight for the uninitiated, but it’s a fairly common disease in deer, often occurring in late summer — especially during times of drought.

White-tailed deer, mule deer, elk, bighorn sheep, and pronghorn antelope are susceptible to EHD, as are domestic cattle and sheep, according to the ODNR. However, according to the Ohio Department of Agriculture, “EHD does not pose a serious threat to livestock, and infections in those animals are likely to be mild.”

Sightings of sick or dead deer should be reported to local wildlife officials or at wildohio.gov.