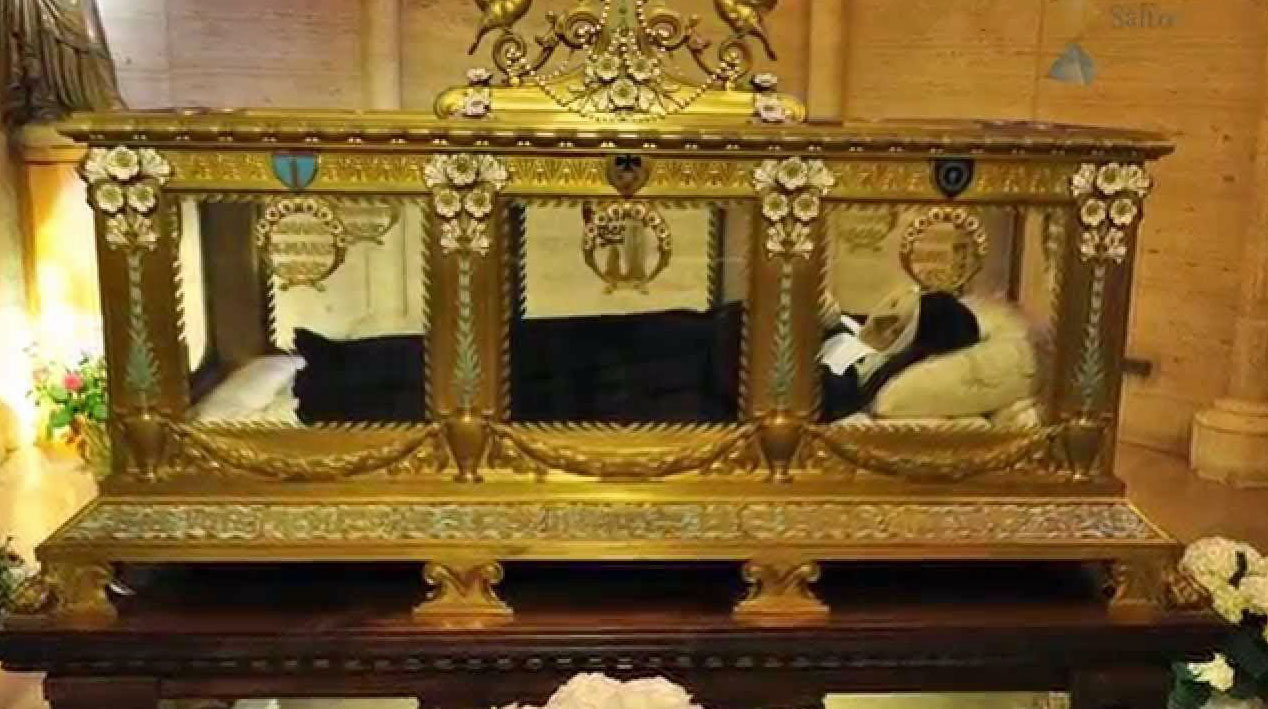 When Saint Bernadette had her first vision when she was only fourteen years old.  She died young, aged 35, and when her body was exhumed over 30 years later it was found to be in near perfect condition.  It has now 140 years since she passed, and her body is said to be still virtually unchanged by time. Her story made her into a saint and the shrine where she now rests has become a pilgrimage site, with millions of people having visited her.

St. Bernadette was born Marie Bernadette Souderis on January 7, 1844 in Lourdes, France.  She was one of nine children and came from a very poor family. They lived in an underground room that had once been a jail which locals referred to as the dungeon.  She was often sick, suffering through cholera when she was young and later on developing breathing problems which lasted the rest of her life. Her poor health is likely the reason why she only grew to be 4 foot 7inches tall and she was not able to attend school.  She had a poor grasp on the French language and instead she spoke Occitan, a language native to the Pyrenees region where she grew up.

Life was hard for her and her family, they struggled to make ends meet.  Oftentimes people would make fun of Bernadette for failing to memorize her religious studies, but she was strong and wouldn’t let the cruel taunts get to her.  Instead, she’d respond that she would always know the love of god, which would shut them up and re-affirm her faith even more.

Bernadette had her first vision in February 1858 while out searching for firewood with her sister and a friend on a cold wet day.  They had gone to a cave known as the old rock and while the other two girls crossed a nearby river, Bernadette had stayed behind to find a place to cross where she wouldn’t get wet.  Having searched and not found such a place, she sat down to take her shoes and stockings off when she suddenly heard the sound of rushing wind, yet nothing moved. In the dark cave the figure of a woman suddenly appeared, it with lit in a bright white light and carrying a rosary.  She prayed with the figure before it disappeared and went on to have a total of 18 of these visions.

When people found out about them, they believed she had seen the Virgin Mary.  During one of her visions she said that the figure told her to drink the spring water from a nearby grotto as an act of penance.  Locals were astonished when the next day the spring water flowed clear instead of muddy and soon people were flocking to the area because they believed that the waters held healing powers.

After word spread about Bernadette, her visions and the spring, she became the center of attention.  She didn’t like all the exposure and to escape it she entered a Catholic convent where she lived a humble life before dying form tuberculosis in 1879.

Thirty years after her death in 1909 experts dug up her body to look for evidence as to why she had seen visions of the Virgin Mary.  When they opened her coffin, they were amazed to find that her body was very well preserved despite having been buried for so long. According to doctors who examined her body at the time, there was no smell or visual signs of decay.  Her hair and fingernails were intact and because of the state she was found in, they said she was incorrupt, or preserved from decomposition. In the Catholic church, this is of major significance because they believe that God allows for the remains of a religiously significant individual to avoid decomposition.  Such a finding is a sign that the person was a saint, and it was cited as one of the miracles that led to her becoming recognized as such.

After being exhumed a second time in 1919, Bernadette was dug up a final third time in 1925 whereupon the church took imprints of her face and hand.  They used them to make wax masks that were placed on her for the presentation of her body which was put in a gold and crystal reliquary. Today, she rests in the Chapel of Saint Bernadette in Nevers, France.  Millions of people have made the pilgrimage to see her incredibly well preserved body and to visit the spring she had visions near, with some claiming to have been healed by the waters.