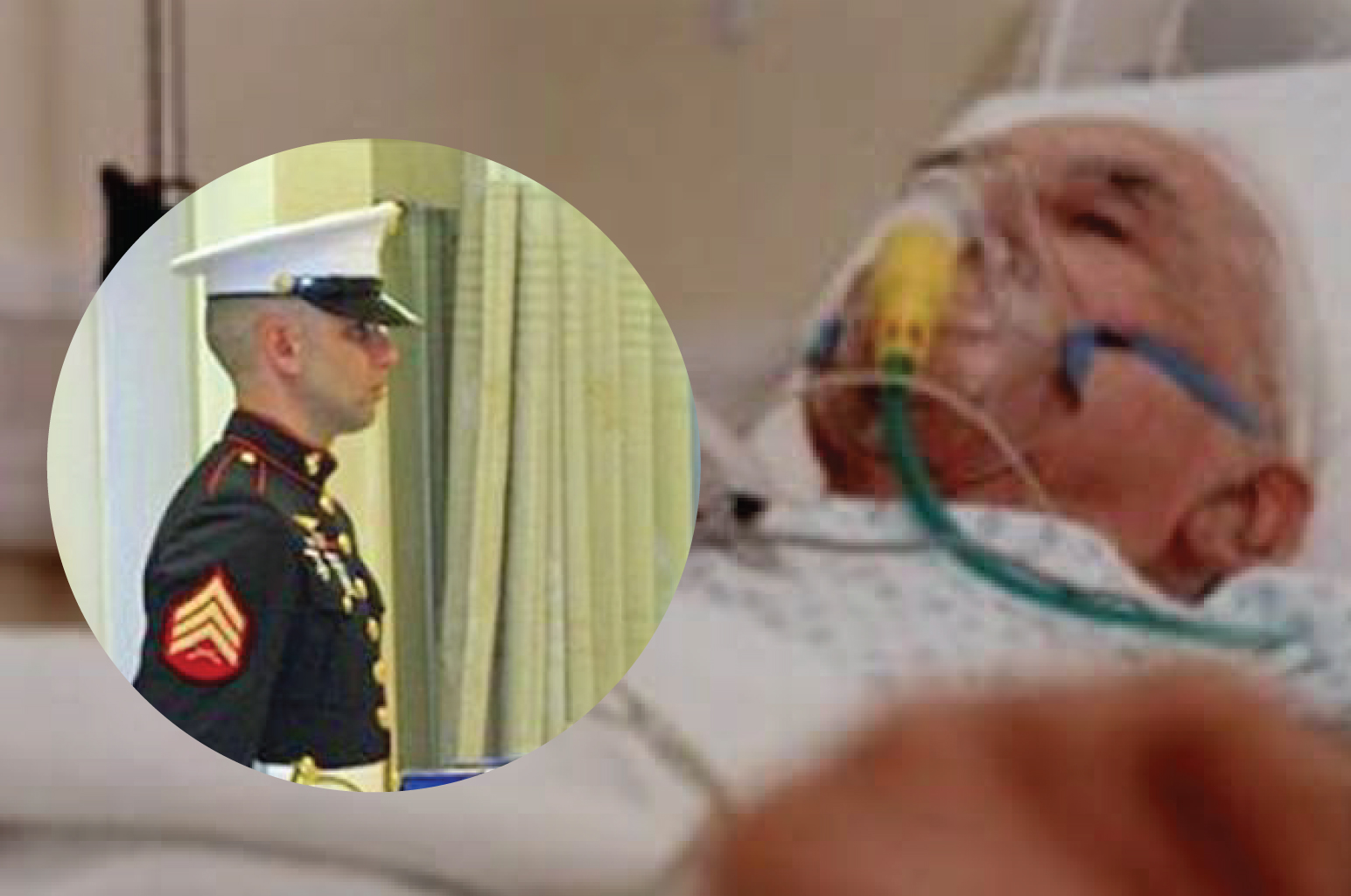 An elderly guy had had a heart attack. Doctors in the hospital realized he wouldn’t survive the night, and his family was notified.

Nurses waited for any family members to arrive, and then a young Marine officer entered the room.

A nurse took the young officer’s hand and led him to the bedside, noting that the elderly man’s son was a serviceman.

The nurse told the old man that his son was there.

The old man didn’t respond due to the heavy sedation he was under, which was helping him cope with the severe pain from his heart attack.

When he finally awoke and heard the nurse’s voice, his blurry vision saw the silhouette of the young man in his Marine uniform.

The old man, eager to be with his son in his final hours, outstretched his weak hands.

The young Marine obliged, taking his hand and gently squeezing it, a sign that he would be there for him until the very end. The man felt encouraged by his son’s gentleness.

The nurse brought the young man a chair to sit on so he wouldn’t become tired. The night carried on, and the Marine officer never moved from the side of his father’s bed.

He held his hand and spoke quietly to him every now and then, never letting him go.

Even when the nurse suggested he take a short break, the officer carried on, wanting to stay loyally by the elderly man’s side.

The nurse was impressed to see how much attention the young man lavished on his father.

He never once looked up at her when she entered the ward, and he ignored all the loud noises of the hospital surrounding him, focused only on the old man.

Throughout the night, the old man stayed silent, content in the knowledge that his son was there to stay.

Dawn began to break, and around this time, the elderly man passed away.

The Marine officer finally got up from his post and went to speak to the nurse to tell her that he had died. She began to offer her condolences.

But the Marine officer did not seem to be grieving.

Instead, he asked her who that old man was. Shocked, the nurse told him that of course, that was his father.

The young man shook his head and said he had never seen that man before in his entire life.

The nurse was dumbfounded and asked why he had said nothing to correct her misconception when she led him to his bedside.

The officer explained that, in that moment, he realized the old man needed his son there more than anything – but his son simply wasn’t there.

Understanding that the man would not be able to tell the difference, he decided to fill that void for him.

The Marine officer said that he was actually at the hospital to deliver news of a soldier’s death to his father, a man named Mr. William Grey.

Tears sprung to the nurse’s eyes and she revealed that that was the old man’s name.

This emotional and heartwarming tale of selflessness and compassion was written by Roy Popkin in 1964, titled Night Watch.

It is so incredible that it has been told time and time again, under many different names, and it never fails to touch hearts.