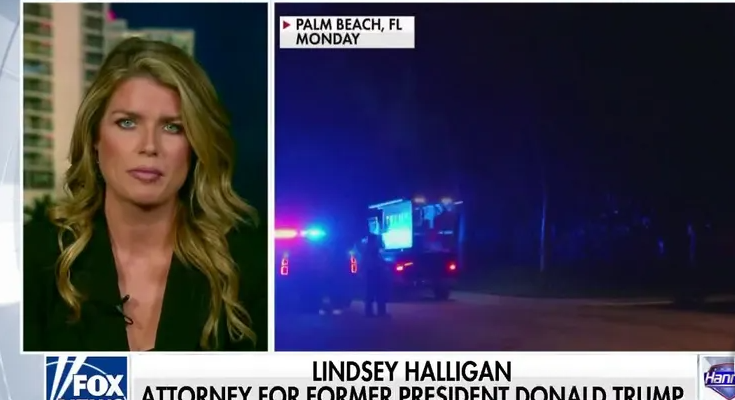 An attorney for former president Donald Trump alleged that during the Monday raid on Trump’s Mar-a-Lago home in Palm Beach, Florida, FBI agents tried to “sneak in” and “snoop around.”

During the search, a former lawyer Trump Lindsey Halligan was present at the time. However, she was not allowed to go into the complex while the search occurred and needed to stay outside between the ballroom and the residence.

Halligan said she first received a call that FBI agents were executing a search warrant at 10 a.m. on Monday, and she arrived about an hour later. She claimed that between 30 and 40 FBI agents, most of whom were dressed casually but some were donning suits, carried out the eight-hour search. 10 to 15 automobiles, according to her, entered the premises.

“So I arrived around 11:00 a.m. and there were about 30-40 FBI agents that I saw, either which were wearing suits, the rest were in cargo pants, masks and gloves. And they basically had unfettered access to the property,” Halligan said  Wednesday on Fox News’ “Hannity.” “They refused to talk to me. They refused to let me in. All I knew is that they were searching areas one, two, and three, which I understood to be the former president’s bedroom, his office, and a storage room. And other than that, we were not allowed to talk to them or go inside at all.”

Halligan believes that the FBI takes boxes and documents from Mar-a-Lago.

The FBI reportedly carried out the search order “in part because they feared additional secret information remained at the private club,” according to reports.

Halligan said, “They had unfettered access to the property. They looked at god knows what in there and did god knows what in there. We have no idea. What the FBI did was an appalling display of abuse of power. All documents requested were previously handed over. President Trump and his team painstakingly reviewed every single document at Mar-a-Lago and gave the government what they requested. If they needed any other documents, they could have just asked. And the warrant was secured under seal, so they tried to get away with concealing this overreach by obtaining a warrant under seal. Nobody knew about it.”

She added, “They knew that President Trump was in Bedminster and hasn’t been at Mar-a-Lago for some time. They thought they could sneak in, snoop around without attorneys present and in case they walked out with nothing, so nobody would know that they overreached this degree. It’s unprecedented in United States history. The government seems to be out of control. It’s plagued with manipulation, corruption, greed, and fraud.”

In a long statement released on Monday, Trump disclosed the raid and criticized the FBI’s targeted and political activities.

“These are dark times for our Nation, as my beautiful home, Mar-A-Lago in Palm Beach, Florida, is currently under siege, raided, and occupied by a large group of FBI agents,” Trump wrote. “Nothing like this has ever happened to a President of the United States before.”