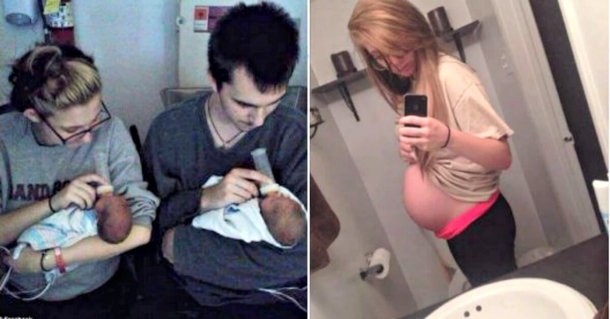 Having children is supposed to be one of the most joyous occasions of our lives, and when you have more than one at a time, that joy should be multiplied.

However, one Alabama couple treated their newborn twins with anything but joy and love from their birthday on Jan. 22 until April 27, when it was discovered that the babies had been badly abused by their vicious parents.

When the babies were brought into Children’s Hospital of Alabama in April, they had to be admitted to the Intensive Care Unit due to their extreme injuries, ranging from bite marks on their faces to severe respiratory distress, according to AL.com.

Jordan Lanie Swenson, 19, and Marion Austin Dycus, 20, both of St. Clair County, allegedly abused their precious newborn twins from the time they were born until they were brought to the hospital in April.

For three months, these babies endured “torture, willful abuse, cruel beatings or otherwise willful maltreatment” and sustained physical injuries that “created the substantial risk of death on multiple occasions,” according to a warrant filed against the parents.

The St. Clair County Sheriff’s Office was reportedly notified on April 27 by a Department of Human Resources supervisor who had been alerted by the hospital of the dire situation.

The infant girl was discovered to have a torn frenulum — the fold of skin beneath the tongue between the lip and gum — which could be due to months of screaming and crying while enduring the horrific beatings. She also had bite marks on her face, and she was in severe respiratory distress, while her brother was suffering from fractured ribs. The twins both had heavy bruising on their head and face areas, AL.com reported.

Swenson and Dycus were arrested on May 3 in Ashville, according to court records, for aggravated child abuse. They have been in jail since, held on $1 million bond each.

How could anyone do this to their precious infant twins?

Let’s hope and pray these sick parents receive the punishment allowed by the fullest extent of the law — which, in my opinion, still wouldn’t be adequate for what they have done.

How should the parents be punished for this horrific crime?