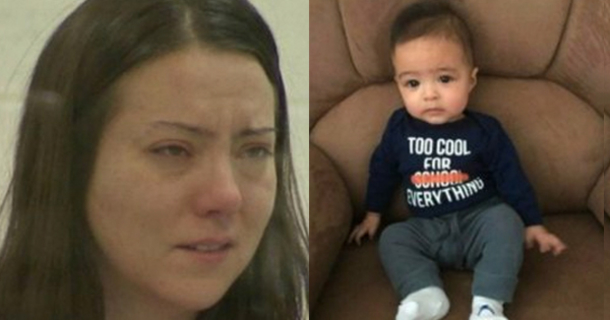 A mother entrusted her Husband’s friend to watch over their 4-month-old son. One day as she went to pick her child up from this seemingly trustworthy babysitter, she was taken aback when the “unhappy” babysitter met her at the door. It was at that moment she discovered something that left her sick.

The mother residing from Palmdale, California, was happy to pick up her 4-month-old son, Aiden Lopez, from the babysitter that her and her Husband chose and trusted house after work. Sadly when she drove into the driveway, she felt something wasn’t right when, the babysitter, Brittany Ann Ingrassi, met her at the door. When Ingrassi opened her mouth, the young mother was shocked and sickened to discover what this babysitter had done.

As the nervous mother approached Ingrassi, she was horrified when the trusted woman uttered three terrifying words that a parent never wants to hear — “He’s not breathing.” Although the babysitter didn’t seem concerned with the child’s condition, the now panicked mother immediately called 911 for help.

Unfortunately, when little Aiden arrived at the hospital, it was discovered that he had been severely abused. According to Crime Watch Daily, he “suffered skull fractures and a traumatic brain injury,” and unfortunately, after four days of fighting for his life, he passed away from his injuries.

Once arrested, Ingrassi pleaded not guilty to charges of second-degree murder, assault on a child becoming comatose, child abuse, and assault on a child causing death, according to Crime Online. In fact, she went so far as to blame the child’s injuries on a “dog attack.”

However, she has since been found guilty in the death of Aiden and has been sentenced to 25 years in Century Regional Detention Facility.
When prosecutors presented evidence during the trial, it was determined that Ingrassi was “unhappy with her work as a babysitter and was under the influence of alcohol when she was watching the child.” Instead of being a responsible and normal human being, she decided that the only solution would be to harm the child so severely that she ultimately took his life.

It’s sickening to think that Aiden’s parents trusted Ingrassi with their son and are now forced to live their lives without him. When you have a child, parents expect to die first, not have to bury their child. Unfortunately, a sick monster like Ingrassi will never understand what she stole from this family. This is a wound that will likely never heal.