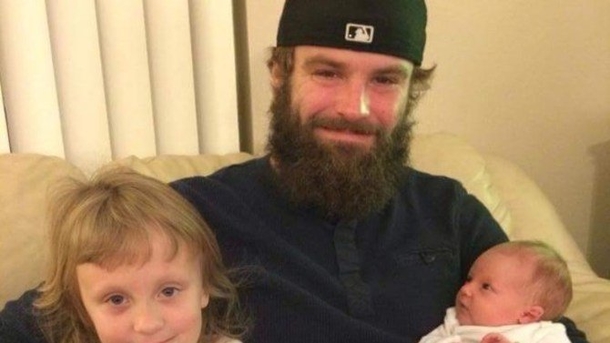 An Iraq veteran from Iowa has died by suicide after he reportedly experienced an extended wait to receive treatment for recurring headaches following a brain tumor.

Curtis Gearhart, 32, had reportedly been told that he would need to wait “five to six weeks” to receive treatment for painful headaches that plagued him. He was recovering from a brain tumor, according to WHO-TV.

“He previously had a tumor. He was worried about it and they told him it would be five to six weeks,” said Valesca Steffens, Gearhart’s girlfriend. Gearhart, who was the father of two daughters and a son, had also reportedly struggled with PTSD. “Guilt,” said Steffens, “a lot of guilt and heartache.”

In April, Gearhart posted a Facebook status that troubled Steffens: “High high’s, and low low’s. I wish my life had a middle ground,” his post read. Steffens said that she tried to help reassure him.

“It wasn’t easy but I felt like I talked him down from a ledge. I still had him, he was still here,” she said.
Gearhart served two tours in Iraq and was honorably discharged in 2007, according to his obituary on Dignity Memorial.
Brie Lyndsey, a close friend, said he was the funniest person she’d ever known in her life. “He was so kind and ready to be there for you no matter what.”

Senator Joni Ernst said that the VA must take steps to prevent similar tragedies in the future.
“We absolutely must ensure our men and women who have selflessly sacrificed in defense of our freedoms receive the quality, timely care they deserve,” said Ernst.

Steffens criticized the VA’s treatment of Gearhart’s situation: “They send these soldiers over so young to fight these wars and then they don’t live up to their promises of taking care of them when they come home.”

She went on to urge others experiencing long wait times for VA assistance to seek care from outside providers. Gearhart had reportedly been worried that help from a non-VA health care provider would have left him in debt.

“I would be in debt for the rest of my life just to have him [back],” she said.

Steffens added that she discovered a bittersweet surprise less than 24 hours before Gearhart was buried.
“I ran upstairs and found out I was pregnant yesterday,” she said, adding that the child will help to keep her partner’s memory alive.
“I hope someday I’m gonna be able to look into his eyes again and that’s a lot to look forward to,” she said.