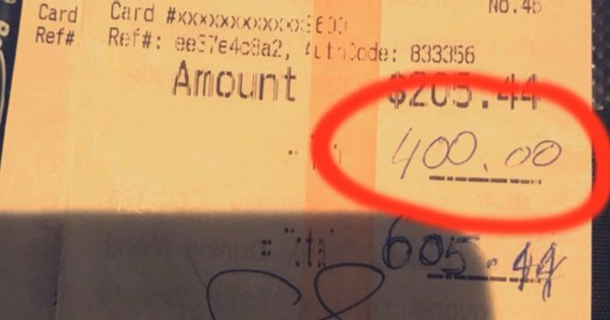 A hardworking waitress in Hawaii just received the tip of a lifetime during her recent shift at an upscale restaurant.
According to KHON, Cayla Chandara was serving a couple from Australia at Noi Thai Cuisine last week when they began asking her some personal questions.

“They asked me where I was from, and I told them I moved here for school but I was kind of in a little bit of debt and I couldn’t go back to school, because I couldn’t afford it and the cost of living here,” Chandara told KHON.

The couple’s bill was about $200, so Chandara was absolutely stunned when they left her a whopping $400 tip.
Chandara was so taken aback by the kind gesture that she knew she had to do something nice for the mysterious couple.
After her shift, she reportedly picked up a card and a bouquet of flowers and brought them over to the hotel where they said they were staying.

“I just thought it was so generous of them. I never get tipped that big. I had to say thank you,” she said. “During dinner, they told me where they were staying, so I ran there after work to see if they’d still be there.”

Chandara dropped off the card and flowers to thank the couple for their kindness, but she had no idea that they still had one more surprise up their sleeves.

According to KHON, the couple returned to the restaurant the very next day with an offer for Chandara—to pay off her student loan debt.
Chandara told KHON that she typically splits her time between working at Noi Thai Cuisine and the Cheesecake Factory just to get by, so the offer lifted a huge weight off her shoulders.

“I want to make them proud. I will take this opportunity with an open heart and be a better person that I can be every day,” she added.
Now that she has help paying off her $10,000 worth of student loan debt, Chandara says she will be returning to school, where she plans to study liberal arts and business.

My FOX 8 has since shared this story on Facebook, where several commenters praised this wonderful act of generosity.
“I have student loan debt too, pick me! Jk. That was an amazing thing for them to do,” one commenter wrote.
“There is HOPE as long as there are people like this!” another wrote.
“Amazing gift! Hats off to the couple!” one woman added.