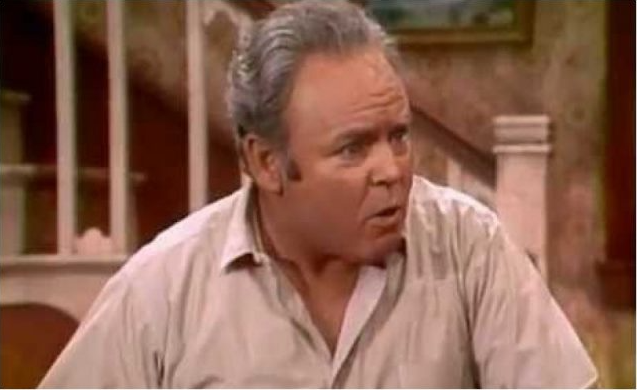 A strong stance on handguns was taken by Archie, the blue-collar, conservative curmudgeon who served as the show’s central character, more than 40 years ago in the first episode of season three.

He told his left-leaning son-in-law, Mike, aka Meathead, “It’s my God-given right to have a gun in the house,” in his trademark loudmouth, working-class New York accent. Archie agrees to participate in a live televised reply after watching a TV editorial that calls for gun control limits.

It was September 1972, and the award-winning All in the Family was in its second year at No.1 in the ratings. As with most All in the Family episodes, Archie Bunker (Carroll O’Connor) delivered a televised editorial responsibility for the ages as Normal Lear’s patriarchal masterpiece.

Speaking on behalf of the organization Guns For Everybody, Bunker was confident he knew how to stop gunmen from boarding flights, a problem that, by today’s standards, seems almost trivial. Delivered in butt-clenching but hilarious form. Because when Archie appears on TV to give the thumbs-up for gun ownership, his logic has the effect, that inadvertently happens.

“All you gotta do is arm all your passengers,” Bunker said. “And then your airlines, then they wouldn’t have to search the passengers on the ground no more, they just pass out the pistols at the beginning of the trip, and they pick ‘em up again at the end. Case closed.”

However, it wasn’t until 29 years later, during 9/11, that this notion actually materialized in some manner. Business Insider claims that on 9/11, there were just 33 full-time air marshals in the United States, but that number increased to nearly 600 right away. With a focus on domestic flights, there were thousands of air marshals by 2005.

“What action did the Communists take as soon as they seized power in Russia? The solution, Archie added in his editorial, is gun regulation. Meathead rolled his eyes at this comment, but Archie was right about what the Soviet Union did after seizing power. The Council of People’s Commissar ordered Soviet residents to surrender their firearms on December 10, 1918. Failure to do so resulted in prompt legal action.

While the scene is comedic gold, what’s happening in America today is as relevant as it was back then. The overall message is something all Americans can relate to.

Perhaps the authors of the Second Amendment, the founding fathers, foresaw what oppressive governments would undertake to seize power.