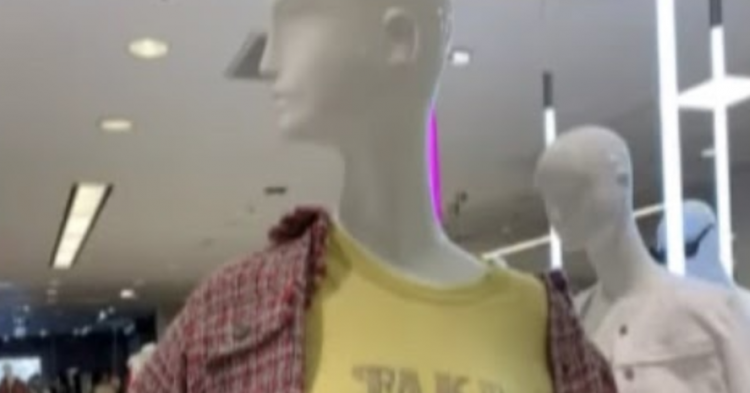 Fake news is not cool.

Just ask Bloomingdale’s, which is being called out over a T-shirt imprinted with “Fake News” that was spotted in a department store in White Plains.

PIX11 reporter Allison Kaden complained on Twitter about the “fake news” shirt on sale at the department store, posting, “Hey @Bloomingdales, this isn’t funny or fashionable. It further delegitimizes hard working journalists who bring REAL news to their communties.” 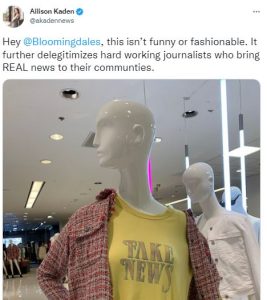 Famous angry person Keith Olbermann joined the chorus, tweeting to his more than 1 million Twitter followers, “What the eff is this, Bloomingdales?”

With this, Bloomingdale’s responded to Kaden’s post, apologizing and saying it would be “working quickly” to remove the shirt.

“Thank you for bringing this to our attention and we apologize for any offense we may have caused.,” a store representative tweeted. “We take this feedback very seriously and are working quickly to remove this t-shirt. Again, thank you for taking the time to alert us.”

In a matter of hours, Bloomingdales removed the design from their physical locations as well as their online stores. The shirt came in a variety of colors and styles and sold for prices between $18 and $38.99.

“Hi, [Bloomingdales]. Apologizing ‘for any offense we may have caused’ is not a sincere apology,” she tweeted. “This is not about journalists’ hurt feelings. This is about damage done to our democracy when your brand joins in perpetuating and celebrating the idea of ‘fake news.’ Please try again.”

The company removed the supposedly offensive item and said it was sorry. What does she want? Blood?

Journalists spreading false information about a story involving reporters taking offense at a “Fake News” T-shirt puts us at a level of irony I don’t think even O. Henry could comprehend.

Watch the video report below for more details: