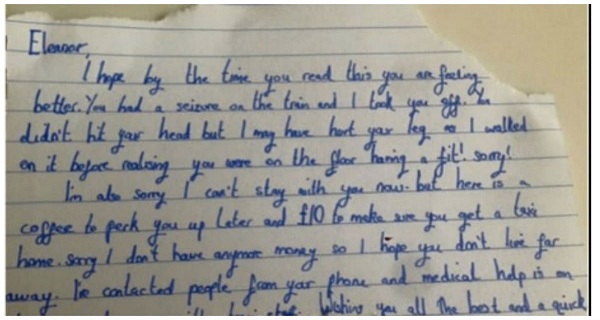 Imagine you were on a train by yourself, but then suddenly everything goes dark.
You wake up by yourself in a hospital, but you have absolutely no idea how you got there. Naturally, you would be very confused and terrified.

This is what exactly happened to Ellie Farnfield, a 27-year-old living in London.

When Ellie was traveling alone on a a Southern trains service to London, she had an epileptic seizure.

As a result, she passed out on the floor, and when she finally woke up, Ellie was alone in a hospital.In the interview with the Daily Mail, Ellie said that she initially had no idea why she was in the hospital. She also added that she first thought that someone had stolen her bag.

As she was looking around, trying to understand what had happened to her, Ellie found a handwritten note beside her.
It was from a stranger named Tom, and she was completely stunned after reading the note.

I hope by the time you read this you are feeling better. You had a seizure on the train and I took you off. You didn’t hit your head but I may have hurt your leg as I walked on it before realizing you were on the floor having a fit! Sorry!

I’m also sorry I can’t stay with you now but here is a coffee to perk you up later and £10 to make sure you get a taxi home. Sorry I don’t have any more money, so I hope you don’t live far away.

I’ve contacted people from your phone and medical help is on its way and you’re with train staff. Wishing you all the best and a quick recovery.

As you can imagine, Ellie was amazed by Tom’s kindness. Not only did Tom make sure Ellie was in good hands, but he also went the extra mile by buying her a cup of coffee and giving her money for a cab.
If it hadn’t been for Tom, who knows what could have happened to Ellie?

“I could have hit my head, fallen off the train, been there for a long time,” said Ellie.

Now, she’s on a mission to find Tom, so that she can thank him in person.

However, it’s a little difficult since the only thing she knows about Tom is his first name. So, Ellie posted about her story on Facebook to see if anyone would help her find Tom.

She also started the #findtraintom campaign, and asked everyone she knew to share the post, which quickly went viral.