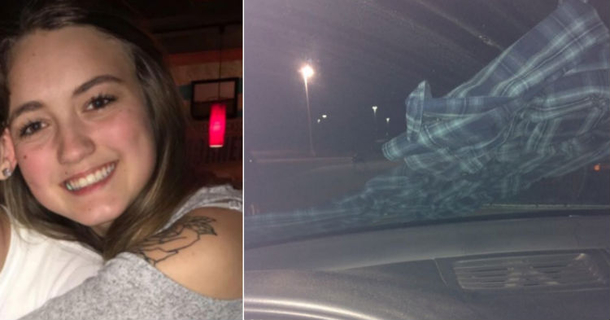 As Ashley Hardacre walked to her car in the mall parking lot where she worked, she didn’t think much of it when she noticed a blue flannel shirt on her windshield. She thought it fell out of her car or someone simply toss it and it landed on her vehicle.

Later on, it would be revealed that the blue flannel shirt was place there for one very scary reason.

Once she got inside her car, she locked the doors, as usual. She used her windshield wipers in an attempt to remove the shirt instead of just removing it manually.

She did this because of all the stories, she caught wind of about how men would place things on women’s windshields in an attempt to lure them out of their cars to kidnap or assault them. There had been several of these cases reported in Flint, where Ashley worked.

So, instead of getting out of her car to remove the shirt, she drove to the other side of the parking lot, because she had noticed there were two cars that were running right beside hers. When she got to an area where there were no other cars in sight, she got out of her car and removed the shirt, then drove home.

“I got to my car and locked the doors behind me immediately as I always do and noticed that there was a blue flannel shirt on my windshield. There were two cars near me and one was running so I immediately felt uneasy and knew I couldn’t get out to get it off. At first, I thought maybe someone had just thrown it on my car for some odd reason.”

Ashley is grateful that her parents had told her about this tactic that criminals have been using, and she’s quite frightened that it happened to her. It turns out that Ashley was right and Human Traffickers have recently been found to leave “gifts” on victims’ windshields. When the person gets out of the car to remove the items, they kidnap them before they even know what is going on.

Flint Township Police Detective Sgt. Brad Wangler has warned residents to always go with their gut instinct and if something doesn’t feel right, seek help or get out of the area immediately. And of course, tell the police about the situation because it’s helpful to know so they can warn others and be on high alert.

Unfortunately, human trafficking and kidnapping is a very real issue and happens more than we think.
In order to prevent these incidents from happening, police have advised people to follow a few rules:
-Always travel in groups

-Stay alert when walking through public places such as parking lots. Nighttime, in particular, is a time when criminals are on the hunt.
-Don’t be distracted by your phone while walking to your car

-Hold your hand in a fist with your keys between your fingers, ready to stab someone if needed
-Try to carry pepper spray if you can