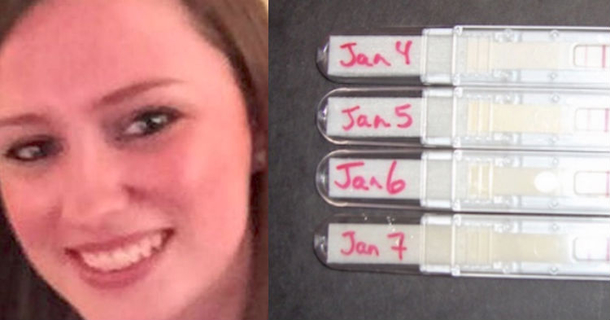 Doctors go through years of school and training, but at the end of the day, they’re just people like everyone else. And people make mistakes. While doctors are trained to provide their best educated diagnosis of the situation, they can only base that on the data and information they have. And if there source is incomplete, then they cannot offer adequate guidance for the patient.

Fortunately, that doesn’t happen often. But as doctors are pushed to work harder and longer hours without more pay, they have more room to make mistakes. And that is what happened for the 25-year-old British woman in this story. She would go through weeks of medical trial and error until she was slammed with the true diagnosis that forever changed her life.

Louise Bryant had been living her life without worries, when her stomach suddenly began to balloon and grow. It looked like she was pregnant, but she didn’t believe it. She had not been engaging in unprotected sex. Something must be wrong.

But when she went to go see her doctor, the professional told her that she was indeed pregnant. Unsure if that was the case or not, Louise decided to take matters into her own hands. She bought a pregnancy test from the drug store and then did it. After waiting for the allotted time, it came back negative. The doctor said she was pregnant but the test said she wasn’t. What was the truth? She still didn’t know.
Regardless of her confusion, her stomach continued to grow. Then the bleeding started. But it was not associated with her menstrual cycle. Yet the doctors still assured her that she had a normal pregnancy. She took another test to be sure. It came back negative. She was in a lot of pain, too.

“If I turned over in bed or got out of the car, I would suddenly feel this shooting pain in my stomach. It was so bad that sometimes I couldn’t stand up.”

Even her husband Ben started to grow worried. She took another pregnancy test and visited the doctor. And it still came back negative. Then Ben demanded that the doctors examine her more closely.

They ran an ultrasound and found what appeared to be a cyst on her right ovary. They urged her to wait for treatment, but less than a month later, the medical professionals told her that it wasn’t a cyst but a tumor the size of a soccer ball. She needed to get emergency surgery.
While under anesthesia, doctors at the Maidstone Hospital in Kent, United Kingdom deflated the tumor and then pulled out the nearly 8-inch thing from her abdomen – along with her right ovary and fallopian tube. And that’s when they discovered that Louise had a rare type of ovarian cancer called grade two immature teratoma.

Fortunately the surgery was a success. She is cancer free and still has hopes of starting a family with her husband Ben.
Louise couldn’t believe this was all happening to her.

“There was something in my stomach all along, but it certainly wasn’t a baby it was a tumor the size of a small football. The tumor was pressing on my lungs and causing me to have difficulty breathing. When I look back, all the symptoms I had are typical of ovarian cancer and I’m glad I was persistent and kept going back to doctors for answers. I was 110 per cent positive that I was not pregnant, but I was repeatedly asked to do more tests. That said, the type of ovarian cancer I had is very rare and only about 60 women in the UK are diagnosed with it a year, so very little is known about it and that’s presumably why it took longer for the diagnosis.”