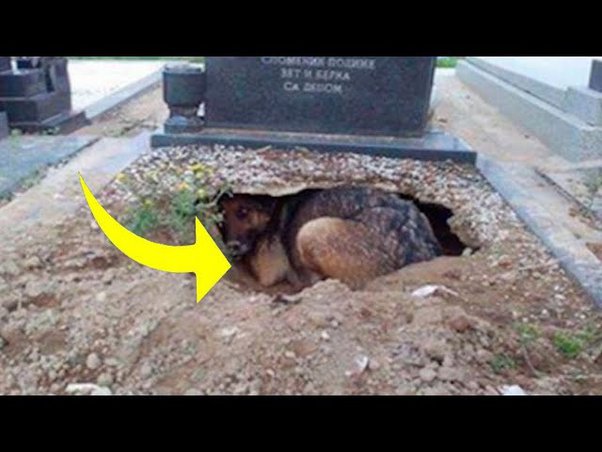 The story I will tell you today happened several years ago at the Cemetery of the Novi Bagrad community in Serbia and spread around the world in a really short time. One day, the locals noticed an amazing thing that was happening at one of the graves.

To the great surprise of the passersby, a shepherd dog spent most of her time at her owner’s grave, only seldomly leaving to go get food. At first, people simply watched the dog, touched by her loyalty to her owner.

Over time, some people even began to bring food for her. However, even when it got cold outside, the animal didn’t even think about leaving her post. The poor thing dug out a small hole near the tombstone where she curled up into a small ball, shivering from the cold and trying to warm up.

Somehow, people realize that the dog would simply freeze to death there. But no matter what they did to get her to leave the grave, the dog refused to do it.

More and more people started taking pictures of the local Hachiko and uploading them to their social networks, where they wrote beautiful words of sympathy and admired the dog’s incredible loyalty. It would seem that it was just another one of those beautiful stories, just like the story of a Chico. But it wasn’t that simple.

One of those posts caught the eye of the animal rights activist Vesta Mihajloski, after which the woman firmly decided to help this poor dog and find out why she was behaving this way. And it was Vestna who soon revealed the secret of the lonely shepherd dog.

When Vesta went to the dog to get to know her better, she turned out to be the only one who could get close enough to the dog’s hole to see another incredible surprise. To the woman’s amazement, the heroine of our story wasn’t the only animal in the whole.

There were also four little puppies there, hiding under their mother. She was protecting them from the severe cold with her own body. The puppies were still very tiny, so the woman realized that they were born just recently.

As it turned out later, the initial reason for the dog’s life at the Cemetery really was her loyalty to the deceased master. While living at the grave, the shepherd dog gave birth to her puppies. So in order to feed them and give them at least a somewhat warm home, she simply had no choice but to dig up a hole for them right at her owner’s grave.

I don’t think I need to tell you how hard it must have been for the dog to find food during the cold winter. But the mother dog did her best to make sure her puppy survived, even though she was very exhausted herself.

Thus, seeing that the dog was barely holding on, the young woman couldn’t just leave her there. Festna spent two weeks coming to see the four legged family and bringing them food and water every day all to make friends with them.

But the mother turned out to be overprotective and refused to let anyone near her puppies. She took food in her mouth and then carried it to her babies. So it went on for some time and each day the dog trusted the woman more and more getting used to her coming by.

And only half a month later did she open up to the new person and finally allowed the woman to take her and her puppies to their new home. There, Vesna immediately surrounded the fondlings with her love and care and the mother dog surely felt it. She didn’t just show no aggression whatsoever but also entrusted her babies to the woman.

Soon the animal got stronger and thanks to the proper nutrition and care the dog quickly gained the necessary weight. In addition, the fluffy family seemed to understand that for the first time in their lives they were safe and the cold Cemetery hole was replaced with a warm and soft blanket as well as human care.

We usually just get one hero in our stories but I think there are two of them in today’s story. The first one is the shepherd dog who devotedly served her master during her lifetime and even after their death she refused to betray them.

And the second one, of course, is the woman who didn’t just help the unfortunate abandoned dog and her puppies but even gave them a new home full of love and care. Please take care of the animals and don’t hurt them